If How I Met Your Mother were satisfying and told in 11 minutes. 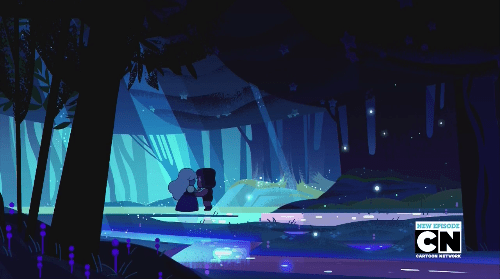 The Recap: Garnet tells Steven the story of how she joined the Crystal Gems. Sapphire was a royal Gem whose future sight was being used by Homeworld to predict battles with the rebels, with Ruby acting as one of her bodyguards. The two accidentally fused when Ruby saved Sapphire from an attack that should’ve been fatal, which also threw off Sapphire’s prediction about defeating the rebels. Rather than allow Ruby to be smashed for this breach of social strata, Sapphire rescues her former guard and the two try to make their way through the unknown of Earth, fusion, and each other.

Welcome back, readers! It’s been an eternity since we parted: Undertale singlehandedly coaxed GameFAQs into setting itself on fire, thousands of high school American history teachers are suddenly super grateful to Lin Manuel Miranda, and yours truly fell down a thus far unending research hole that has retroactively given me eternal anguish for not pointing out that homage in “Nightmare Hospital” (also, until further notice I am resolutely imagining the Gem who spearheaded the Cluster project as Herbert West). Oh, and I think there was a Space Trek? I hope this long hiatus has treated you all well.

And what an episode to come back to! This managed to be both an extremely streamlined fairytale romance and an incredibly dense bit of visual storytelling. The framing device of Garnet telling the story is a clever bit of work, giving a meta-reason for the storybook nature of things as well as the excising of what was sure to be a fraught, terrifying time for Ruby and Sapphire when they first got to earth. And it opens up a presentational field day. The backgrounds have the angular, representational look of paper dolls or stained glass and are additionally washed out in single color palettes (even Rose and Pearl!) while Ruby, Sapphire, and Garnet pop from the screen in bold colors that highlight the joy of their becoming.

And Estelle is giving a masterful performance her, playing Garnet as storyteller, Garnet as new fusion, and all of the Gems whose voice Steven wouldn’t know (an especially clever touch) with such dexterous skill that you don’t even think about how much of this episode is one actor. Charlyne Yi and Erica Luttrell are also well settled into their roles at this point: Yi backs off from the bigness of her performance in “Keystone Motel” and creates a subtler Ruby, fearful in her aimlessness but fiercely loyal (though she does have a bit of trouble keeping both the character voice and her pitch during the duet); and Luttrell’s Sapphire is warmer here, with her emotions almost escaping from under her mask of stoicism.

The duet makes a perfect capstone on the proceedings, with lyrics that are charmingly awkward to offset the romantic sweep of the score—the mundane details in a grand romance, eventually fading into a hum of “Stronger Than You” against what might be the most beautiful backdrop in the entire show. It is gorgeous, and a magnificent way to come back after almost three months of hiatus.

As for lore details, it would seem that the “Rose is Pink Diamond” theory has a bit more ammunition now—conservation of narrative detail dictates that you show something on screen because it’s important, and in a convoy full of high ranking Gems it’s only Blue Diamond who has a Pearl. You can also spy a silhouette that looks remarkably like Lapis in Blue Diamond’s court, suggesting a potential reason for why she was deemed at threat. And the design of the court in general is interesting: Sapphire is the only one we know to have future vision, but all three visible blue gems (BD, Sapphire, BD’s Pearl) have their eyes hidden, giving them a general “seeing what cannot be seen”/secret intelligence motif. And how about that diplomatic convoy whose plan involves straight up crushing the rebel forces, huh? Diplomacy seems at best tied to surveillance here.

Speaking of the rebels, I do want to give a small nod to Pearl and Rose’s appearance here. It is all kinds of fantastic to see Pearl as such a fearsome force on the battlefield—with “Sworn to the Sword” mostly highlighting Pearl’s dangerous, potentially deluded selflessness, it’s nice to see that she also won her share of victories. Not only won, but is apparently some kind of Legato Bluesummers-esque horror story preceding the main event. Pearl and Rose’s teamwork has a fantastic amount of character even with only a few beats—I suspect that trick Rose pulls to unfuse but not destroy the Rubies will be a very important skill for Steven to master. And Pearl is shot from low angles and drawn with especially sharp lines, making her the imposing focus of the frame even when Rose looms behind her. By contrast, when they welcome Garnet to Earth the pair of them have the color balance waaaaay toward white, making them look like an almost blinding light of hope from the future. There is also comment to be made about Rose interfacing with others and the contrast of Garnet’s “more interesting” (and thus, useful for intelligence) juxtaposed with the genuinely kind, good advice that Garnet should simply accept herself for who she’s become. A complicated Gem, that Rose Quartz.

Tomorrow is Steven’s birthday! Can you believe he’s turning fourteen, according to that cake in the trailer? Yeah, I kind of can’t either. We’ll have to see together. Also, I’d gear up some Peridot-related pain. Yellow Diamond’s coming back, and I forsee a Zuko-like mistake in the near future.

It is SO GOOD to be back!

Vrai is a queer author and pop culture blogger; they’re frankly excited to see someone besides Pearl take the brunt of the suffering this time around. You can read more essays and find out about their fiction at Fashionable Tinfoil Accessories, support their work via Patreon or PayPal, or remind them of the existence of Tweets.