Creationists Upset Over Exclusion From Cosmos, Do They Have A Point?

Where was my Jesus riding a dinosaur? Where, I ask you? 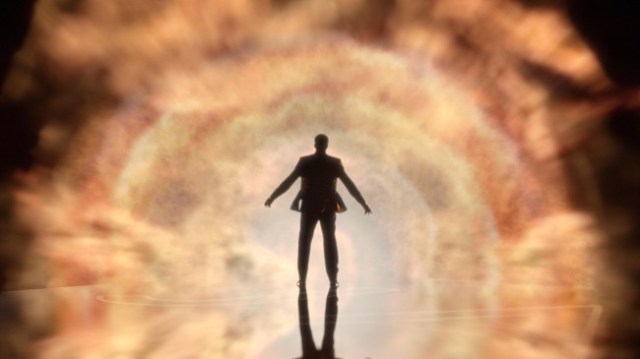 It’s probably inevitable that religious conservatives would eventually take offense at Neil deGrasse Tyson’s Cosmos. However, the most recent creationist complaint is just as surprising as it is contradictory.

Dr.Elizabeth Mitchell of Creationist group Answers In Genesis wrote a review of the first episode in which she states:

Cosmos: A SpaceTime Odyssey, if the first segment is any indication, will attempt to package unconditional blind faith in evolution as scientific literacy in an effort to create interest in science.

We hope that future segments will spend more time showing actual scientific observations-such as the brief part of this episode showing where earth is in relation to the rest of the universe.

Not surprisingly, Mitchell also critiques the lack of scientific evidence for evolution, although it’s safe to assume that had Cosmos taken the time to undeniably disprove creationism in the first episode, Answers in Genesis would have had an entirely different complaint. Says Mitchell,

it takes a metaphysical statement as its theme. In the first episode, after a brief look at the immensity of space, the gears on Cosmos’s well-named “ship of the imagination” shift into worldview-based beliefs about billions-of-years of cosmic evolution and molecules-to-man evolution and stay there.

For the record, here is the one and only mention of evolution from the first episode of Cosmos:

We are newcomers to the Cosmos…Our own story only begins on the last night of the cosmic year…Three and a half million years ago, our ancestors — your and mine left these traces. We stood up and parted ways from them. Once we were standing on two feet, our eyes were no longer fixated on the ground. Now, we were free to look up and wonder.

Even this vague 30 second aside was too much for some Fox affiliates, but I actually agree with Answers in Genesis and wish the first episode had been less Spaceship of the Imagination, more cold hard creationism-refuting facts.

Mitchell’s critique over Cosmos‘ tone is likely a Catch-22, since the presence of more science would only give creationists a different issue to blog about. However, her complaint that the show will “package unconditional blind faith in evolution” addresses an interesting question: does Cosmos have anything to offer religious viewers?

Personally I think the metaphysical tone of the show allows Cosmos all the immensity, possibility and mystery that the title implies; a lot of what Tyson says is vague enough to allow for religious interpretation. However, the first episode had so much mystery and wonder that both science buffs and religious conservatives (not that the two are necessarily mutually exclusive) might feel like something is missing.

In an excellent article in The Wire , Danielle Wiener-Bronner and Abby Ohleiser ask each other What does Neil de Grasse Tyson’s ‘Cosmos’ Say About Religion? Here are some of self-professed “space nerd” Abby Ohleiser’s thoughts:

Cosmos does take on the issue of religion in a very substantial way. And it doesn’t deny the compatibility of faith, or the notion of God, with the scientific method. There are plenty of scientists who are also Christian without being creationist in the way that Ken Ham is, because there is little non-Biblical evidence to support any of the major tenets of young earth creationism. Instead, Cosmos posits that belief, any belief, trumps an individual or a society’s ability to question, to accept and evaluate different ideas. Historically, those institutions limiting scientific advancement have included organized religion.

I agree with Ohleiser that religion is substantially represented in Cosmos, at least to the extent that a statement like Tyson’s “We are all made of star stuff” can be wondrous and emotionally meaningful in both a secular and non-secular context. However, if Cosmos is making the point underneath its layers of metaphysical beauty that creationism is crackpot and religion as an institution has prevented scientific advancement, then frankly I missed it, and Answers In Genesis obviously did too.

Creationists, I have no doubt that coming Cosmos episodes will infuriate you sufficiently that lack of inclusion will soon be your smallest complaint. In the meantime, look up The Church of The Flying Spaghetti Monster, I’m sure they can commiserate with you.

(via Jezebel and The Wire, image via Cosmos)