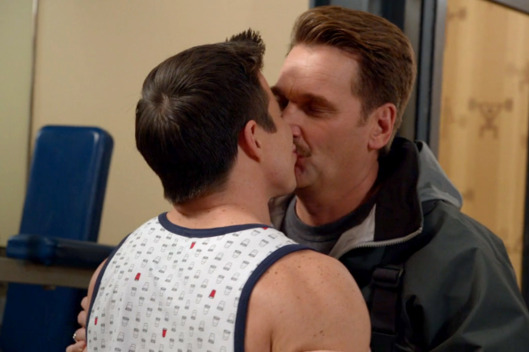 Crazy Ex-Girlfriend on The CW is one of the most gleefully and surprisingly subversive shows on TV right now. It’s feminist, it’s sex-positive, and while some of Rachel Bloom’s Rebecca Bunch falls into stereotype territory, it’s only as a reflection of her depression and anxiety – she holds on to certain things, because they’re all she feels like she has – an d the stereotype is usually subverted by a clever song lyric.

The show is also inclusive. In last night’s episode, the character of Rebecca’s boss, Darryl Whitefeather (played by Pete Gardner) sang a coming-out song that was the culmination of a completely organic, gradual realization that he is bisexual over the course of several episodes. Check out  “Gettin’ Bi.”

As GLAAD points out in a recent report, even though those that identify as bisexual outnumber gays and lesbians combined in the U.S., there were four times as many gay and lesbian characters on broadcast TV in 2015 than bisexual ones. Of what little bisexual representation there is, GLAAD reports that most of it depicts characters that are “untrustworthy,” “self-destructive,” and “lacking a sense of morality.” So, nuanced representation of bisexuals — especially male bisexuals — is desperately needed.

Enter Crazy Ex-Girlfriend‘s Darryl Whitefeather, whose burgeoning relationship with White Josh (so-called to distinguish him from Josh Chan, the Filipino “ex-boyfriend” Rebecca chased across the country) is doing a lot to showcase how a bisexual man has to navigate relationships and the world.

I can’t remember exactly how the idea of [Darryl] being bisexual came up but it did. And we both had the same reaction, which was that it was something that we had seen a lot in our lives—we knew a lot of people who were bi—but we hadn’t seen it so much on television and also maybe not so much in comedies.

We wanted to reflect what we see and experience in our lives. We didn’t have any kind of overall agenda in taking on that storyline, it’s really just about good stories and good characters.

The team worked with a GLAAD representative on the character to make sure that they got certain things right. In so doing, they were made aware of stereotypes they didn’t even know existed. Says McKenna:

One of the things that we learned was the extent of the stereotypes. I sent [songwriter Adam Schlesinger] a list of what I understood to be the most prevalent stereotypes and he took that and ran with it and came up with something so joyful.

The song is joyful, but that doesn’t mean that Darryl isn’t going to have to deal with the same relationship drama as everyone else, nor does it mean that Darryl’s not going to get things wrong. After all, while Darryl is only now coming out later in his life, White Josh has been out since he was a teenager, and he doesn’t feel the need to, say, hide who he is from his coworkers:

I think that there’s something poignant about somebody at a later stage of their life coming to this realization while in a relationship with someone who has been out and [for whom] it’s not a big deal.

This is not a couple that’s going to sail off into the sunset with no further problems. They’re going to have the same vicissitudes that any couple has. I don’t want this to be a thing where Darryl figures this out about himself and then we park him in some unrealistically happy situation.

If you’re not watching Crazy Ex-Girlfriend, you really should be! Don’t let the title put you off, because you’re missing out on something brilliant (RIP Don’t Trust the B– in Apartment 23!).

If you are watching, what did you think of last night’s episode? Tell us in the comments below!