What Could the Countdown Clock on Twilight Author Stephenie Meyer’s Site Mean? 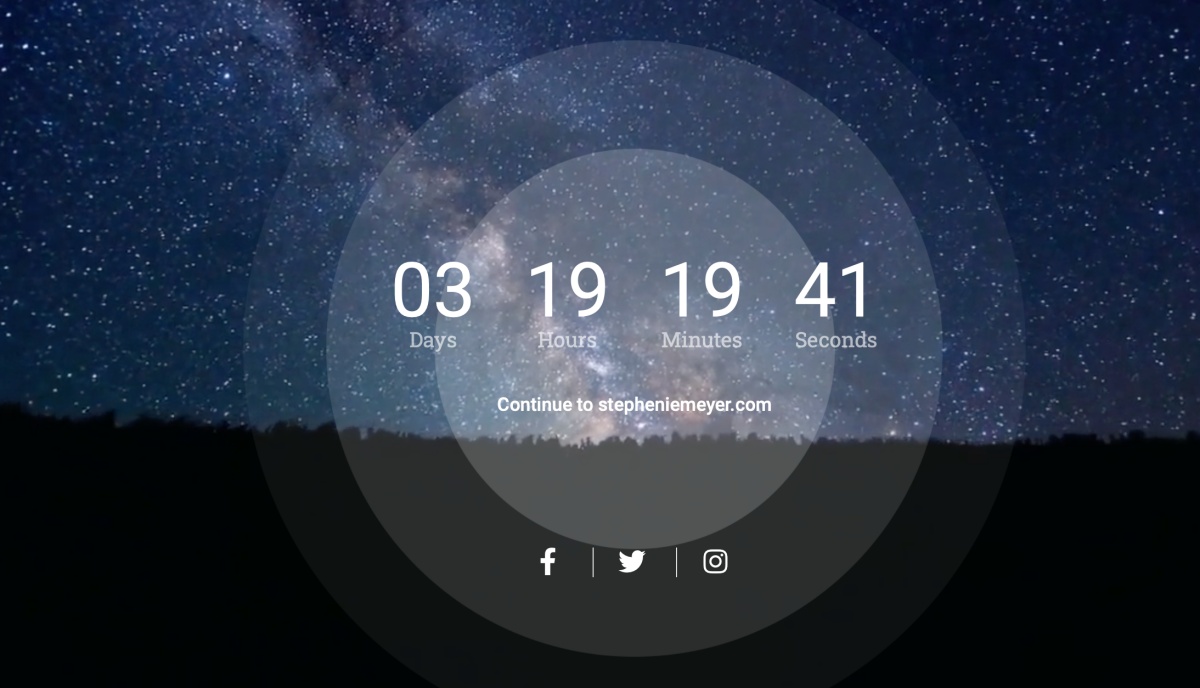 Something is coming from Twilight author Stephenie Meyer as the countdown clock on her website prepares the masses. The question is … what in the seven hells could it be? One thing that people are speculating is that it could finally be the release of Midnight Sun.

For those of you too blessed to have been aware of this, Midnight Sun was planned as a retelling of Twilight from sparkly vampire Edward Cullen’s perspective. It was one of the many things that Fifty Shades of Grey author E.L. James stole from Meyer when she wrote Grey, which was the first Fifty Shades novel from Christian Grey’s point of view. The first draft manuscript for Midnight Sun first leaked years ago, and after that, the project has always been at a standstill for the author.

“I’m [still] working on it,” Meyer told Hypable back in 2015. “I didn’t completely shelve it because of [Grey]. It was just that — I was telling this story — it feels like it’s cursed. Because every time I start it, something happens and it’s just like, ‘ugh.’ But… my mother is going to kill me if I don’t [finish] it. It’s more true than you know. This is all she wants from me. Every birthday, every Christmas present I get her, [she goes,] ‘You know what I really want.’ This is my life.”

Hypable says that they have a “strong reason” to believe that the forthcoming announcement will be about the debut of the long-awaited title—which already makes me a little anxious.

In recent years, a lot of us have taken a look at the overwhelming underbelly of sexism that revolved around the way Twilight has been perceived, as a cult phenomenon in the media. As someone who started making pop culture criticism because I loathed Twilight, I am totally aware of the bad “cool girl” mentality that I helped embody with the “vampires shouldn’t sparkle” angle that I focused on.

However, that doesn’t make Twilight good, or the problems with the series go away, simply because a lot of the media was sexist in their coverage. The books are still very problematic when it comes to abusive relationships, race, gender, sexual assault, motherhood, and a whole range of issues. Nothing is to be gained by putting Edward Cullen’s perspective at the forefront. One of the only semi-redeemable things about the franchise is that it does center the needs and wants of a teenage girl, and she gets everything she wants—even if we’re all confused as to why she wants any of it.

We absolutely shouldn’t be hypercritical on things just because women and femme people like them, but that doesn’t mean it isn’t important to address the legitimate issues that a series perpetuates.

I’m looking at you, Outlander.

Also, if this is teasing a sequel to The Host, I’m going to laugh so hard.