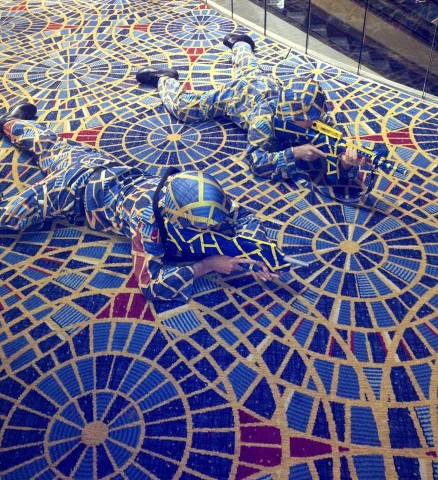 Dragon Con is held at the same Mariott hotel in Atlanta every year, so the people behind Volpin Props decided to get extra-creative and dress up as the unusual-looking carpet that every con-goer knows and… well, tolerates. It was a huge hit with everyone — right up until the carpet designers slapped them with a Cease & Desist. Womp womp.

The trouble started when the costumes became so popular online that Volpin Props decided to market their pattern on Spoonflower, a website that allows you to create, print, and share custom fabrics. We can’t even imagine how many people would even want to sew their own hotel-specific camouflage outfits to illicit such an action, but such is cosplay. People make costumes based on fanart based on idea based on TV shows, and then they get genderswapped and steampunkified on top of that. Anything goes.

Anyway, the actual carpet creators, Couristan Inc., got wind that their design was being sold without their permission and put a stop to it the other day, much to the chagrin of all their carpet fans. Come on, guys! Be cool!

While Volpin Props founder Harrison Krix is in complete agreement with this legal decision — it is technically Couristan’s pattern, after all, even if nobody understands why they would be so eager to admit that fact —  he does acknowledge that it’s pretty silly given that this would be the one thing to get him in trouble, considering how often cosplayers and other fandom-related works tend to skirt the line with copyright. He wrote on Facebook:

Of all the things to get a Cease and Desist over, of ALL the replicas I’ve made over the years, I’ve received one from Courtisan Inc, designers of the Marriott Marquis Atlanta hotel carpet. Spoonflower has pulled the design, as is their right, so sorry everyone who wanted some fabric of their own!

The absurdity is palpable.

Oh well. Guess if you want to be a carpet now, you’ll have to put in the work designing it yourself.

(via The Mary Sue and Daily Dot, image via Volpin Props)