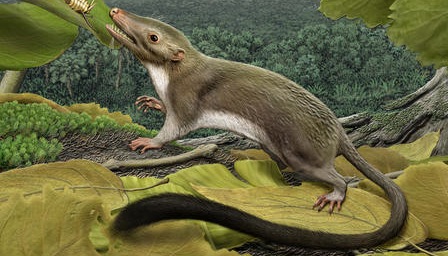 First SETI asked us to name two of Pluto’s moons. And now our assistance is needed to name our common ancestor. Remember, Internet: With great power comes great responsibility.

Earlier this month a team of international scientists published their findings on a “hypothetical placental ancestor” that they discovered by analyzing “the world’s largest dataset of genetic and physical traits.” The small, shrew-like critter survived the asteroid strike that killed the dinosaurs, which is quite an impressive thing, but it still doesn’t have a name.

That’s because there are no fossils of it, so scientists actually aren’t allowed to give it an official scientific name like Homo sapiens or Tyrannosaurus rex. That’s where we come in. The American Museum of Natural History and Radiolab are accepting suggestions until March 5th, after which time they’ll choose their favorites for a “March  Madness”-style tournament where everyone can vote to determine the winner. Exciting!

You can submit your suggestion via Tweet with the hashtag #nameyourancestor or through Radiolab‘s website. Before you run off to do so, though, here’s they’re looking for:

“Something that does for this shrew doppelgänger what Lucy did for Australopithecus. We need to transform this placenta mammal the way ‘King Tut’ helped “Heru Nebu: Wetches Khau Sehotep Neteru” (‘He who Wears the Crowns and Satisfies the Gods’) become a household name. The way Jay-Z reinvented Sean Carter. A name that lives somewhere between dog and Fido; the former is a label for an entire species, the latter is a fun handle that’s become shorthand for ‘cuddly canine friend.'”

Get to it, Interwebs. Be shrewd with your choices. Make it geeky.