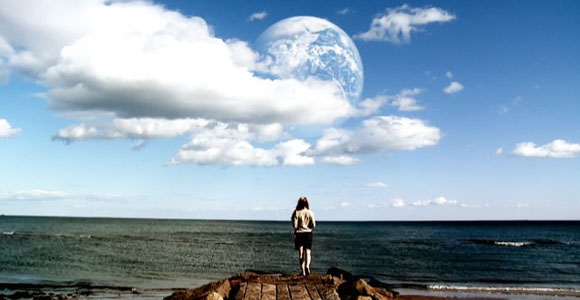 With the recent discovery of Kepler-22b (and others like it), it’s not really far fetched to start thinking about what life would be like on another planet similar to our Earth. But what if there were another planet out there that was identical to Earth in every way? Right down to there being another you. That is the premise of Another Earth, winner of the Alfred P. Sloan Prize at the 2011 Sundance Film Festival, but it’s also a lot more than that. Hit the jump for the trailer and my review.

When I first watched the trailer, I knew this was a movie I had to see. I missed when its small run hit theaters and wasn’t reminded of it again until I was Christmas shopping in the blu-ray section. Another Earth was sitting on the shelf and I was already in love with the concept, so I picked it up. I’m very glad I did. (I also knew I had to write about it for The Mary Sue)

I must preface this all with one important thought. Another Earth may disappoint some. The concept is extraordinary though, oddly enough, one must set science aside to truly enjoy a film whose plot technically revolves around it. It looks extremely science heavy but it’s more-so a story about human beings. If you’re waiting to see space travel or the surface of other planets, you’ll be waiting a long time. If you’re ready for an amazing character story with tons of thought-provoking content, you’re in the right place.

Main character Rhoda Williams, played by co-writer and co-producer of the film Brit Marling, is as human as you can get. She’s a teenager on her way to MIT to study astrophysics but her life takes a huge detour when she does something unforgivable and has to live with the consequences. Her tragic plight? Killing the family of John Burroughs, played by Lost’s William Mapother, in a drunk driving accident. It just so happens this occurs on the same day an identical Earth is discovered by scientists.

What follows are spectacular performances by Marling and Mapother. Their characters meet again a few years after the accident and Rhoda attempts to make John’s life better, while not revealing who she really is to him. Is she doing this for his benefit or her own? Rhoda may not even have the answer but it’s all she can do to carry on with life. There’s also the tremendous opportunity of getting away from it all by traveling to Earth 2, something that an entrepreneur (similar to Virgin’s Richard Branson) offers up to one, normal person.

So what about this other Earth? Well, as I said, it’s identical to ours but how could it have gone undiscovered for so long? How has life evolved in the same exact way and what would you do if you met your other self? Most of all, what are the implications from a scientific standpoint and what would this mean for the 6.8 billion people on our planet and the 6.8 on Earth 2? Or are we Earth 2?

And that’s why I loved Another Earth. A lot of these questions are presented in the film but all those and more ran through my head during and for days after viewing it. And I love movies that make me think. Even though the character story is the supremely powerful and what this film is really about, the backdrop is what really sold it for me. The film offers beautiful visuals and lots of quiet, contemplative moments plus an ending that will make your heart skip a beat. (Plus it’s got a great score.) If you love science and space (but can suspend disbelief) and want to watch a truly emotional tale about humanity, give Another Earth a try.