Soon You’ll Be Sharing Messages On Your Contact Lenses 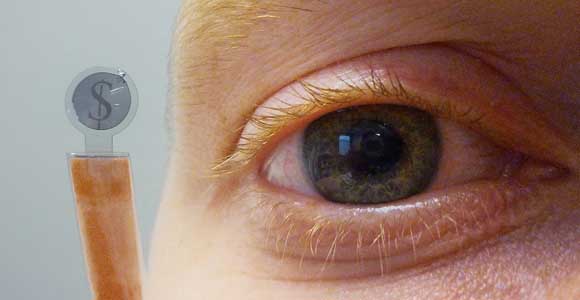 I’ll admit, the only time I’ve worn contact lenses is for cosplay and they bother the hell out of me. I know if you really need them you can get an eye doctor to specially fit them to your eye but still, the feeling is weird. Suffice to say, I think having a message displayed to your retina from a contact lens is pretty disconcerting. But well, here comes the future!

A curved liquid crystal display has been invented by scientists in Belgium. Discovery News writes, “Unlike previous developments in contact lens displays, University of Ghent researcher Jelle De Smet focused on creating a curved LCD that would be incorporated into a contact lens rather than embedding LED technology into one. This approach means De Smet and his colleagues at the Center of Microsystems Technology have a larger display area, according to the university.”

Direct applications could be medical, as an artificial iris, or cosmetic, as an iris with tunable color, or it just could serve as a gimmick. The dollar sign is a reference to the many cartoons featuring people/figures with dollars in their eyes :)

When worn, the image would only be visible to bystanders, since the eye cannot focus on objects in such a close proximity. Research is currently being performed to solve the focusing problem and to see whether an embedded contact lens display that can be seen by the lens wearer is feasible.

So yes, right now, the person wearing the lenses can’t actually read the message but others can. I’m imagining that scene from Indiana Jones and the Last Crusade where Dr. Jones’ student flashes him a message on her eye lids being played our 100 years in the future.

“Normally, flexible displays using liquid crystal cells are not designed to be formed into a new shape, especially not a spherical one. Thus, the main challenge was to create a very thin, spherically curved substrate with active layers that could withstand the extreme molding processes,” said De Smet. “Moreover, since we had to use very thin polymer films, their influence on the smoothness of the display had to be studied in detail. By using new kinds of conductive polymers and integrating them into a smooth spherical cell, we were able to fabricate a new LCD-based contact lens display.”

So, weird or cool?