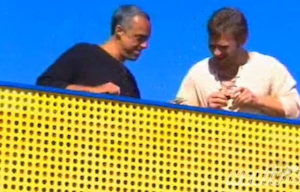 Tonight’s LOST was yet another doozie, ripping us away from the present-day drama with which the most recent episode ended to furnish us with some Jacob/Man in Black backstory (Expect a comprehensive episode recap tomorrow morning.) (Update: here it is.)

Jimmy Kimmel — whose show follows LOST on ABC and who must really be digging his Most Favored Nation status — spoofed the long, long rivalry between the two by presenting them with a delightful new pastime: Connect Four Million, which takes about as long to finish as … explaining LOST to someone.

Now’s as good a time as any to mention that we’ll be all over the two-and-a-half-hour LOST finale on May 23, including the commercial-soaked final episode and the Kimmel extravaganza to follow: Stay tuned.