How Will The New Companion Change The Doctor? Steven Moffat Explains. | The Mary Sue

How Will The New Companion Change The Doctor? Steven Moffat Explains. 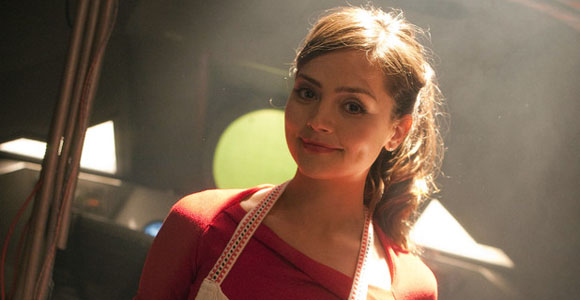 While a lot of us are trying to put off the departure of The Ponds as long as possible, many of us are excited to see how Doctor Who’s newest edition, Jenna-Louise Coleman, will interact with Matt Smith. Well, show runner Steven Moffat recently talked about just that.

The creator spoke with SFX, not just about Coleman’s character, but also what the Ponds leaving will do to our dear old Doctor. “We are going to do the story properly of the Doctor having lost a friend and making a new one. We’re not taking that lightly,” he said. “It’s not in one door out the other. It’s the story of how all that affects him, why he engages with somebody else and what’s going on with that — that’s all important.”

And that’s the perpetual story of the Doctor, loss and depression turns into newfound friendship and joy. So what does Coleman bring to the table?

It’s surprising just how much the show changes with a new co-star. The Doctor is quite different with her, and the way you watch them is quite different. You watched the Eleventh Doctor and Amy arrive together. It’s like they grew up in the same sandpit, playing. They felt not quite like equals — the Doctor never feels like an equal to his companion — but you knew them equally well and they were equally important to each other. They formed around each other. And one of the interesting things about writing the Doctor is that he’s so responsive to the people around him. It’s almost like left on his own his personality would slowly disintegrate. He becomes what people want him to be, a little bit. So he’s Amy’s Raggedy Doctor.

Because the Doctor and Amy were “new” together, they grew together and, Moffat adds, she and Rory are almost like his parents.

With a different companion he becomes a slightly different man. He dresses differently. The mere fact that he’s so much taller than her suddenly reveals that Matt Smith is very tall, not, as people assume, about average height, because he was about the same height as Karen. He’s the senior man, not in the sense that he’s more important but he’s the one you know already, and he’s training up a new one, as it were. In these five episodes the Doctor is practically the adopted son of Amy and Rory. He’s gone from being the wonderful man from space — Space Gandalf, as he wants to be — to being that troublesome kid that they try and keep under control. They even talked about getting babysitters for him in one unfortunately cut scene. They love him, but they know he’s a big kid, they know they have to look out for him, check he eats and all that. Whereas with the new companion he’s back to being the mysterious spacefarer.

Space Gandalf. Thank you for putting a new, wonderful phrase in my vocabulary Moffat.

For those who have yet to watch the Season 7 premiere, “Asylum of the Daleks,” I’ll put this next bit under the spoiler cut. We know Coleman arrived earlier than expected. It was previously discussed the new Companion would make her first appearance in this year’s Christmas Special and that may still be the case. At the Season 7 premiere I attended in NYC, Executive Producer Caroline Skinner said casting Coleman as Oswin in the episode was just a last minute genius idea by Moffat. It was certainly a pleasant surprise but it doesn’t necessarily mean that Oswin and the new Companion are one in the same. We’ve seen actors utilized on the show (and Torchwood) more than once.

With all that said, I’ll leave it to you all to discuss how different you think Coleman’s character will make the Doctor. Please put the word SPOILER in front of your comment if you’re going to discuss the Season 7 premiere for the sake of those who haven’t gotten to watch yet.