Just In Time for Doctor Who Day: The Mary Sue Interviews Matt Smith! 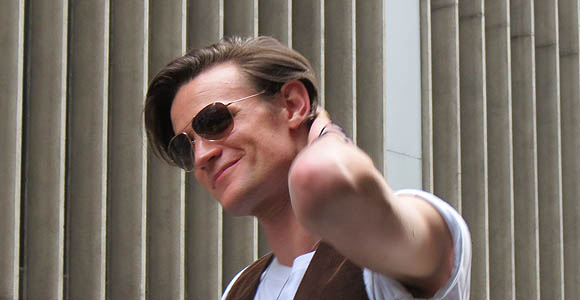 He’s the Doctor. He’s cool. And yes, we got the opportunity to speak with him recently at the New York premiere of BBC’s Doctor Who Season 7 along with Karen Gillan and new Executive Producer Caroline Skinner. Matt Smith is a delight to speak with, he’s got lots of energy and is constantly thrilled at questions he’s probably been asked hundreds of times. So, are you curious what we asked the actor and…wait a minute, did he just tell us what was going to happen to the Ponds??

Before we go on though, I must mention Smith brought his parents to the screening [I sat right by them!] of “Asylum of the Daleks.” He told us , “I brought my parents to see it over there actually, to give them a little taste of a New York audience because they’re not going to know what’s hit them. You know how they do it over there.” Now, on with the interview!

Is the Doctor more of a loose cannon this year?

Matt Smith: I think he’s always a loose cannon. I mean, the interesting thing is, we sort of pick up where we left him and he was oon his own. And as Amy says to him, he’s got to be careful of traveling on his own. I think it makes him perhaps less compassionate somehow, I don’t know. But what’s really interesting about these next five episodes, which is the first season, if we tag that as the first season, it deals with the fall of the Ponds and the demise of those two great companions that the Doctor is hugely, hugely attached to and had such a significant impact on him as a character and for me as an actor. So that’s bound to be an event that flips his universe massively.

Your personality is a huge part of the role, how much do you really think you and the Doctor intersect?

MS: It’s an interesting question, isn’t it? I very much believe in a definition between character and actor, I believe they are two separate things. Ultimately, the Doctor is 1,000 years old, I am not. He is much cleverer than me, he is much cooler than me, he is much more than I will ever be. But what’s wonderful about it is I’m lucky enough to get to sort of be close to that and be close to the idea of him and have the ideas that he has and inform them and you get to think and use your imagination in a way that is beyond what we would do every day because he thinks in a completely different way to use as human beings. He doesn’t understand the kind of domesticity of life, the normalness, the marriages, the staying down and going to work every day. I mean, why, why do it? Travel around.

MS: I’m not good enough to write an episode of Doctor Who, it’s a real feat. You’ve got to be some writer to come in and in 47 minutes you’ve got to squeeze a whole lot of narrative in. Every time the character speaks they’ve got to be pushing the story. It’s a difficult show to write. But I’d love to direct one. But again, I’ve got a long journey to go. Absolutely in my 30s I’m going to push it and explore the idea of directing because frankly [he said jokingly] that’s where the creative power is. I’m fed up with being a puppet! It’s absolutely something I would love to do because I’m interested in visual drama and connecting images and making a story thereafter.

The Mary Sue: Is there an actress you could see playing the Doctor, and how do you think that would change the role?

MS: I think there are many actresses that could play it because there are so many wonderful actresses. I mean, it would change the role because she would be a woman so when you put her in a room full of men, it’s a different scenario than if you put a man in a room full of men, because she’s a different sex. Would it change the fundamentals of the character? No. But it’s an interesting idea, if the Doctor’s a woman, does she have a Doctor baby? Is there a mini-Doctor? I don’t know, who knows? What actresses could play her? Oh gosh, so many, so many could play her. It depends on what age you would want. [He was really thinking hard here] It could be…Charlize Theron is pretty kick ass, isn’t she? They just have to find a brilliant actress. I never see that happening any time soon to be honest. I don’t think it will happen. [Because you’re not leaving us?] No. And I’m not turning into a woman. 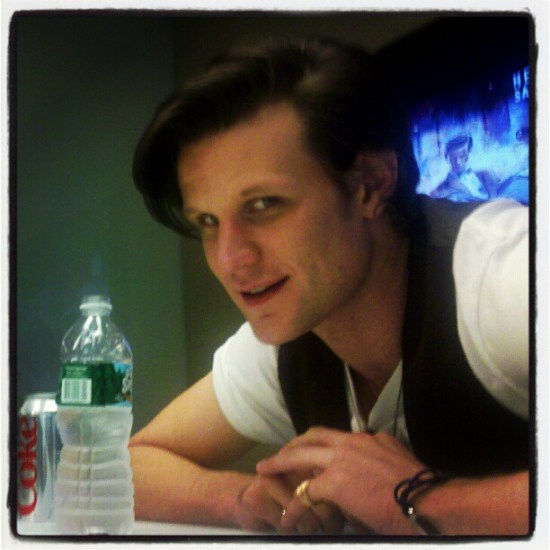 When the Doctor meets his new Companion will he be sad or will he be the normal Doctor?

MS: I think it’s something that we’ve got to wait and see because we have to see what happens with the fall of the Ponds but absolutely that’s going to have a big effect on him. And interestingly, when he meets a new Companion, I think what’s so exciting about this show is it gets to change him as a central character. I can’t tell you what will happen to him because it would spoil it but absolutely I think it will affect him and change him and change his nature because it can’t not.

How was it shooting here in New York and without having to worry about the Weeping Angels, what would the Doctor want to do in the city?

MS: First and foremost, I want to shoot each and every episode of Doctor Who here in New York. I love this city. I love filming here. Everywhere you point a camera there’s something brilliant to look at. I just love the city, I love it. I think maybe he’d go and play some jazz with Woody Allen for a bit perhaps, grab a steak at Balthazar maybe, I mean I don’t know. Go and stand on top of the Statue of Liberty? Take the TARDIS to the bottom of the Hudson and see what’s down there. [The Mary Sue: You don’t want to know.] Yeah. And he’d do it in a brilliant way. I think he’d go back to the 40s or the 20s maybe and hang out in Brooklyn and play baseball on the street or whatever with some cool cats. [This city is a universe unto itself.] It really is.

How do you hold onto the character moments while you have big epic episodes?

MS: I think fundamentally it has to be about…I think people tune in to see the relationship between the Doctor and the Companion ultimately every week. And I think Steven invests in that. And around it, what’s so wonderful about the show and the form of the show is you could explore every world without restraint. There are no limits to where you can take this character. It’s very interesting this season because Amy is sort of worried about the Doctor being alone and I think he needs a human Companion by his side. I think seeing the universe alone is a different thing to showing the universe and letting someone else experience it. And I think, at its heart, that’s sort of what the show is. He’s giving people this gift of all of time and space and that’s what’s so wonderful about playing him because I think, what a thing to say to someone: “Do you want to come with me?” And she’s like, “well, what would I see?” “Everything you could ever imagine. Everything possible, ever.” And as an idea I think that fuels the heart of the show really.

How was carrying the Olympic torch?

MS: It was good fun actually. I loved the Olympics.

If you had a time machine, where would you go?

MS: I’d pick up Frank Sinatra and Marilyn Monroe and I don’t know, because I’m in New York let’s say, let’s do the last 200 years in New York for a couple of days. Could be fun.

You’ve seen how the fans feel about the show, have you ever felt as strongly about something?

MS: Football. Absolutely. And it’s humbling to be part of this show because the fans, who are the show, and have been, and will be long after my time, are a remarkable bunch of fans. They really are. I don’t think I’ll ever be involved in anything where they’re quite as passionate and supportive. And, you know, kind of kooky.