I hug my father. 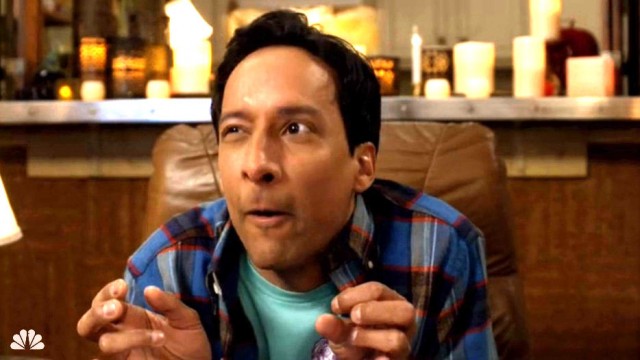 Another Dungeons & Dragons episode! Worth it. This one focused on Hickey… kind of. The plot worked, but it was more of an excuse to have everyone play out a ridiculous D&D scenario again, which is just fine by me.

Hickey gets upset when he finds out his son didn’t invite him to his grandson’s birthday party, so the whole group gets together to play the only thing Hickey’s son cares about, D&D, to bring them together. That is, after Jeff makes a quick speech about how helpful it was last time with a joke about secondary characters.

Neil’s still out there… doing stuff in the background.

So, everyone heads over to Abed and Annie’s for a contrived quest to help Hickey bond with his son, who understands fist bumps about as well as his father.

I have a whole lot of trouble recalling Hickey’s son’s name, because he’s played by David Cross, and I just keep wanting to call him Tobias. Anyway, he quickly realizes the group’s ploy and derails the game, which causes everyone to be thrown into an imaginary river and Jeff winds up the Dean’s father.

He spends the rest of the game warding off the Dean’s advances. You know, normal father/son stuff.

Of course, everyone eventually gets pretty into the game,

And Hickey and his son agree that whoever kills the evil necromancer first will get what they want out of the other. Again, more totally well adjusted father/son stuff.

We also find out the Dean keeps a picture of Jeff folded up in his pocket, which I guess isn’t super surprising.

After being split up by the river, the competing teams headed by Hickey and his son run into each other at the entrance to the necromancer’s tower, and after the Dean makes a bold sacrifice for father/son love,

A battle ensues, which goes kind of like this:

And Hickey and his son wind up the only ones left. Abed teaches them the lesson of the episode when the necromancer escapes during their pointless fighting, and they wind up bonding over rifling through his tower and continuing on to try to pick up the pieces of their failed D&D campaign.

The rest of the group gives them some privacy, and Abed approves of Hickey’s newfound appreciation for D&D. Well, and probably the bonding moment with his son. Whichever.