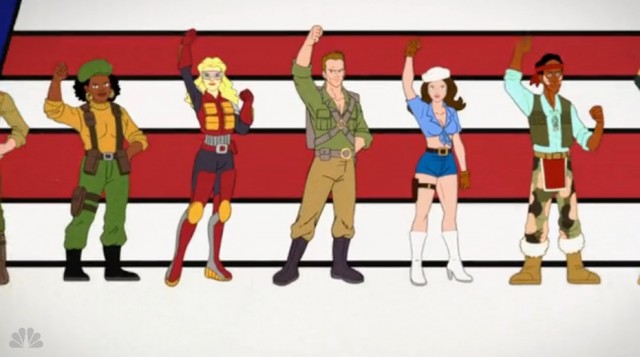 Community was back this week after a one week hiatus, and it was worth the wait. They did another animated episode, and this one was an incredible G.I. Joe homage. It mixed hilarious, loving critique on classic cartoon shows (did Cobra really walk around saying “Cobra” like they’re Pokémon? I legitimately cannot remember) with some pretty great metaphors for growing up.

When it starts, Cobra is attacking the Taj Mahal, and G.I. Joe is defending it, because that’s exactly how international relations work. Britta is Buzzkill, Annie is Tight Ship, Shirley is Three Kids, and Jeff is Wingman. Jeff shocks the rest of the G.I. Joes by actually killing someone from Cobra as he tries to escape, because they’re all worse shots than stormtroopers and have been missing each other for decades.

That lands Jeff and the rest of the crew, who are dressed like serial killers and/or strippers, in G.I. Joe’s reject bin, where they meet Abed as “Fourth Wall,” whose outfit is at least three layers of racist.

Abed starts to break down the delusion Jeff is having, but they’re freed from captivity when Cobra commander arrives to avenge his totally platonic fallen comrade, and they all try to save the base with cheap animation and non-lethal suppressive fire.

Jeff can’t stop killing people, which seems like a metaphor for being unable to stop himself from growing up, so they go to Greendale in the G.I. Joe universe, but Jeff still doesn’t want any of Abed’s alternate reality talk.

When they arrive, they have to dispatch some of the Vice Cobra Assistant Commander’s minions.

That turns out to be pretty easy, because grown up logic and syndicated children’s cartoon logic don’t get along all that well.

They reach the study room and, through Abed’s expertise in delusion, finally figure out that real Jeff is in very real medical danger—the kind in a one-hour drama—because he took some questionable age-reversing pills. He’d been lying about his age and just turned 40, and he can’t deal with it. Abed comes up with a plan for him to get back to real life, which doesn’t need a whole lot of logic because of the world they’re in, but Jeff tries to convince everyone to stay for totally mature reasons.

G.I. Joe and Cobra team up and confront Jeff for all the killing, but he tries to team up with Joebra, because he’s like Neo in the third act of the Matrix and can promise them Godlike powers. Then, he finds out that the animated universe is missing stuff like alcohol and nudity—you know, adult stuff—and he finally realizes he needs to escape.

He follows Abed’s plan, which works perfectly thanks to the animated universe’s lack of internal logic, and he makes a man out of young Jeff, who has been controlling him the whole time.

He wakes up in the hospital in the real world, and everyone is really excited that he pulled through.

They all make Jeff feel better about turning 40 for a few minutes while mocking “adult” drama shows and their frequently cheesy endings just as much as they mocked animated kids’ shows.

Of course, like any good syndicated cartoon show, we get a lesson at the end, but it’s not too heavy-handed, because you don’t want to turn an entire generation into jaded, sarcastic babies.