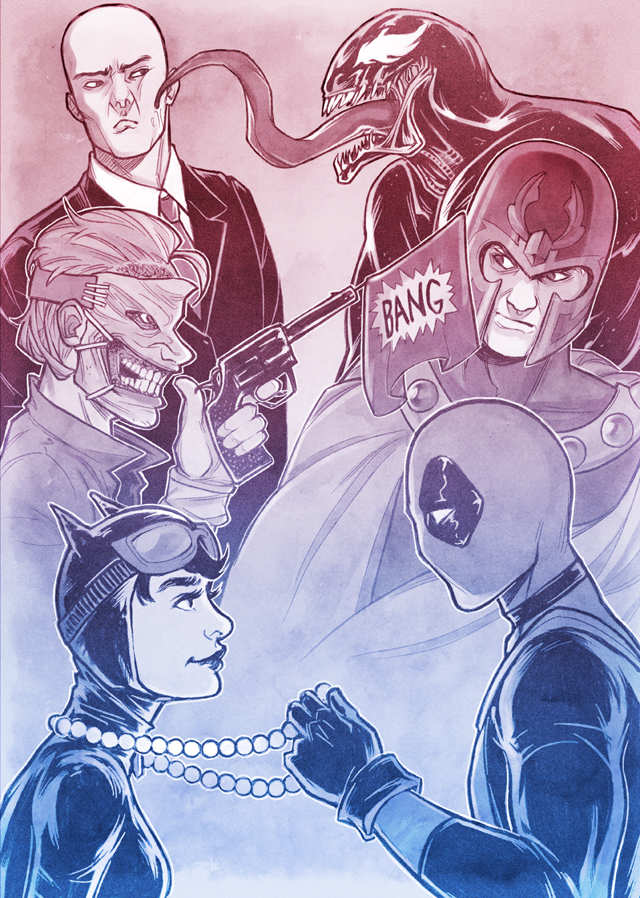 Find a random person and ask them to name a comic book hero, then ask them to name that hero’s arch nemesis. Even the least geek-savvy of civilians can tell you that Superman always butts heads with Lex Luthor, Batman is forever fighting the Joker, and Spider-Man will deal with one version or another of that pesky Green Goblin.

The evil-cackling, hand-twisting super villain is as much a part of superhero iconography as the cape and mask, and an established hero will often have a longer list of enemies than friends. If you’re looking to read about your latest super crush, it’s a good idea to look up a few of their major foes and some of the other big bads that occupy their universe. Here’s a quick guide to the types of terror your hero is likely to encounter and a few infamous names you should know.

Just as every hero has an origin story, every villain has a motivation, which they typically announce early in the story or reveal dramatically during the climactic confrontation. Bad guys come in a wide variety of shapes and sizes, but they can generally be broken down into three tropey categories.

The simplest and most straightforward kind of baddy is the doppelganger, an alternate version of the hero that is just plain evil. Some doppelgangers, like the infamous anti-Superman, Bizarro, hail from a Mirror ‘Verse dimension where everything is opposite and everyone is evil, while others become deliberate foils to their white-hat counterparts, like the various Reverse Flashes. Then there’s the evil alien symbiotes who just happen to resemble the hero’s character design and are terrifying. Thank you, Spider-man cartoon of the early ’90s, for making sentient black ooze one of my great childhood fears. Ironically, I am also afraid of spiders.

On the other end of the bad guy spectrum are the sometimes-villains, the self-serving frenemies who align themselves with or against the hero, depending on what they want (usually money) and how much they can get (a lot). Frenemy villains aren’t necessarily evil; they’re in it for themselves, but that enlightened self-interest tends to be tempered by a conscience that leads them to save the occasional kitten and sometimes the world. Cat Woman, for example, spends most of her time stealing things and lounging on her piles of expensive jewelry, much to the dark knight’s consternation, but it’s not unusual for her to team up with her bat-themed foe to stop an even bigger bad. See also Deadpool: mostly a good guy, might stab you in the face if somebody pays him. Or if he feels like it.

Finally, there is a classic villain trope we’ll call the Mad Scientist. This villain, who may or may not actually be a scientist, is marked by two specific and universal features: a resource or resources that allow them to wreak havoc on a large scale, and a frustrated sense of entitlement. The resources in question could be technological know-how or lab-related superpowers, in the case of actual scientist-types like Whiplash and Poison Ivy, but it could also be anything from magical powers to armies of minions to great big piles of money. Many villains, like Lex Luthor, who present a credible threat to the hero and to humanity in general will have two or three of the above, while criminal organizations, like the sinister beekeepers of AIM, might have all of them.

The second hallmark of the Mad Scientist is the loss or threat of losing something they think they deserve to have. The more tragic set, like Hobgoblin or Mister Freeze, are driven to evil by the need for revenge or to protect a loved one, but most of them just think they should be in charge. In the Mad Scientist’s story, the hero is the bad guy, the obstacle that keeps them from getting what is rightfully theirs. Really, it’s the hero’s fault that all these buildings got destroyed. The hero made them kill all those people and take over that small country. If the hero would just mind their own business, everything would be fine.

Next time you see some MRA dude ranting about evil feminists, just picture Magneto whining about what a dick Professor X is. You’ll feel better.

Obviously, there are some villains who don’t fit into these boxes, most notably the Joker, whose motivation varies wildly from one version to the next. Then there’s the Planet Eaters (name of my SF lesbian punk band), like Galactus and Phoenix, who are really just looking for a snack.

Most of the above big bads have appeared in movies, so you’re probably familiar with one version of them or another. Since Marvel and DC have graciously announced their movie releases for the next few forevers, you might be looking to learn more about an unfamiliar hero or two. To help expand your foundation of comics knowledge, here’s a few of the notorious nemeses you may run into.

As in Ares, the Greek god of war. Hates peace, women, and puppies. 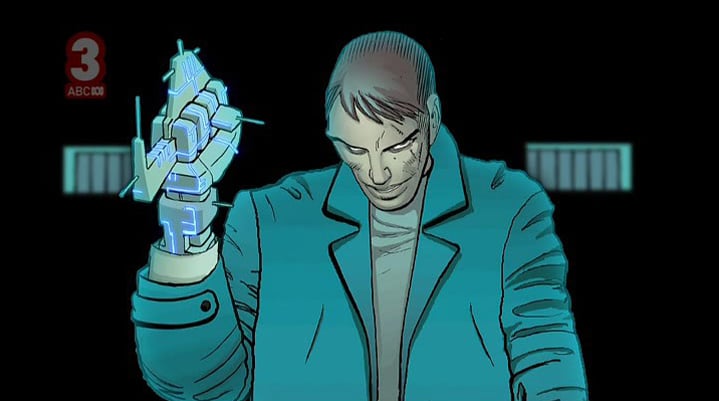 Spoiler alert: He kills T’Challa’s father and is a dick. Rumor has it we’ll be seeing him very soon. 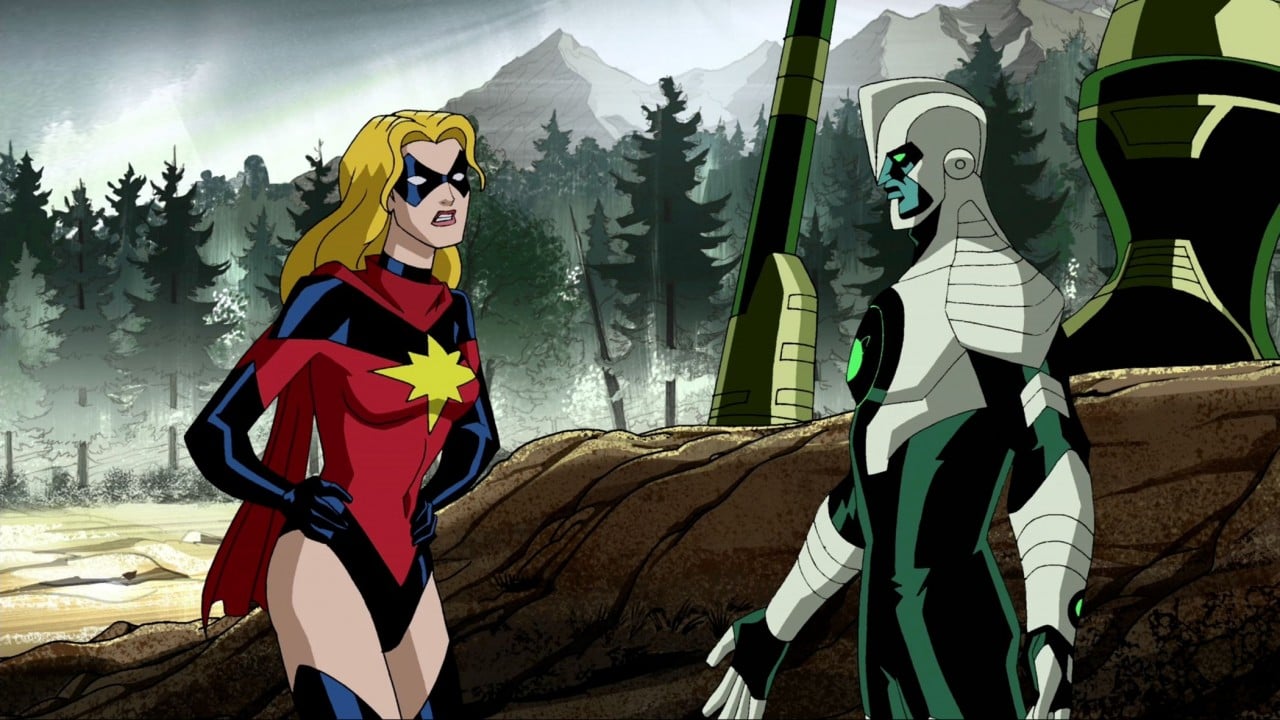 Nemesis: Captain Marvel (no, the other one)

Such an asshat that even the other Kree don’t like him. Accidentally gives Carol Danvers superpowers. Oops. 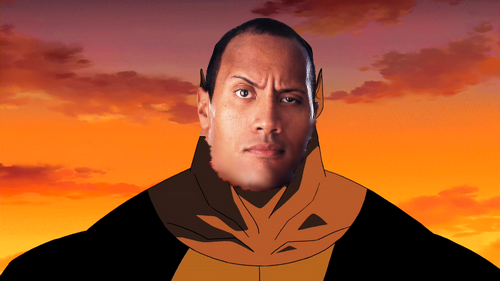 Nemesis: Shazam, aka Captain Marvel (no, the other one)

Yes, a lot of villains have names that start with “Black.” Whether Black Adam is actually Black depends on the artist knowing that Egypt is in Africa. A lot of them don’t, apparently. Also, The Rock has been cast in the movie version of Shazam.

Nothing Beats a Good Bad Guy

All of these heroes have extensive and often overlapping rogues galleries, so this is just a snapshot of the evils you might encounter in your shiny new comics. The most popular and longest-standing heroes are often the ones with the best bad guys. Batman, in particular, is held up as an example of a fairly white bread hero with a vibrant and varied catalogue of enemies to liven up his story.

I won’t go so far as to say a hero is only as interesting as the evil they defeat, but it’s not much of a stretch. Stopping purse-snatchers and rescuing kittens is all well and good, but it’s generally not enough to keep a reader hooked for 22 pages. Unless of course your hero is something like Captain Kitten Saver, in which case, good luck with that. (I’d read it. I won’t even lie.)

For less specialized do-gooders, there needs to be some kind of conflict to keep the story moving, some looming threat that hangs over the hero’s existence like a heavy cloud, some dark figure to contrast with the clear light of righteousness, someone to bring irony to whatever joke the hero made at the beginning of the issue.