Comic Book Theater Festival Week 4: And So It Ends 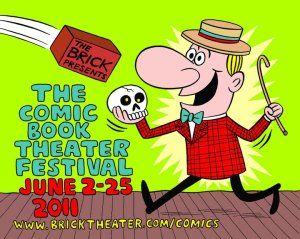 I don’t know if I can review things anymore.

I have been reviewing shows for the Brick’s Comic Book Theater Festival for the past month and I’m exhausted. I’m drained. I’m out of reviews.

And I still have not seen everything. I have missed BATZ, Reporter Girl, Savage Radio Plays, The Deep, Gutter Space, Manifesto and Action Philosophers. There was simply not enough time or words to review them all.

Though, I suppose that is a good thing. How can I complain when there are too many good plays to see?

And that’s what made my coverage of the Festival so difficult: every damn play was good. There was not one play I saw that did not excite me or inspire me in some way. That makes for an exciting viewing experience, but it becomes damn difficult to review.

What I have taken from the Festival is this: no matter how weird or geeky or strange you think your art is, there is a place for it. Never think that no one will get it; someone will. Never be afraid to put your art out there, because you don’t know what it might mean to someone else. You will have an audience, they may not be the biggest but they will appreciate what you have done.

And with that, here is my last batch of reviews.

The Bubble of Solace
Written & Directed by Jeff Lewonczyk

Bubble of Solace takes the played-out trope of the socially awkward comic book fanboy and gives it a heartbreaking spin. AJ (Roger Nasser) is a sad lump of a man, who can only muster up enthusiasm for the comics he reads in the comforting darkness of his comic book shop’s off hours. Safe from what AJ views as an oppressive outside world, AJ loses himself in familiar narratives, stories that were read to him years ago by his long-deceased father. When his failing shop’s future is threatened, though, AJ’s once dependable comics start taking dark, unexpected turns.

Jeff Lewonczyk (who is also the producer of the Festival) has taken great love and care in creating the Bubble of Solace universe. Not only is the action rooted in a worn-in reality and the characters fully realized but the fictional comics beloved by AJ, essentially characters themselves, are given rich back stories and mythologies. One would expect issues of Blue Star or
Lewis and Clark 2000 to actually exist in the real world, and it is almost disappointing to realize they only exist in the world of the play.

The entire cast does great work, but special mention has to go to Nasser, who plays AJ with aching vulnerability. AJ carries the entire show and Nasser achieves just the right tone to make him a sympathetic, tragic antihero.

Bubble of Solace is a show that stays with you long after the final bows. It is a show that you fall in love with, the more you think about it. It is no wonder that the Brick has chosen to extend its run with an encore performance. See this show if you can.

In the same sitting you can catch two short plays with unique hero-inspired themes.

Savior is a short play about Savor (Mac Rogers), an office drone with a seemingly meaningless job and a penchant for comic book escapism. Content to slack through the workday, Savor’s routine gets disrupted by the entrance of Alana (Kristen Vaughn) a caseworker with a special interest in Savor’s work performance.

At first it seems like Savior would tread the familiar “corporate life stifles hero’s true potential”, but the narrative takes a twist as Alana pushes Savor and the seemingly meaningless job may not be what it seems.

Savior is oddly refreshing in that it makes a superhero out of a man just doing his job. It makes a shlub into a hero and never puts him in a costume. It is a brief show, but a neat re-imagining of superhero origin stories.

The second play in this bill was a bit darker, a bit more ambiguous, but still satisfying.

When Alex was a young boy, his father dressed himself in a makeshift superhero costume and shot himself in the head. He leaves Alex an extensive comic book collection and volumes of journals detailing his supposed exploits as Captain Moonbeam. As an adult, Alex makes a living selling his father’s beloved comic books while pouring through his father’s journals. He seeks to purge his father from his life while simultaneously clinging to his memory.

Moonbeam deals with some familiar comic book themes: dead parents, childhood trauma, etc., but Comtois gives it an edge but blurring reality in a Black Swanian manner. Comtois never spells out anything for the benefit of the audience, and the play ends somewhat mysteriously.

Moonbeam makes a nice little companion piece to Savior. Both shows deal with superhero origin stories and takes them to unexpected places.

Sandwiched in between Savior and Moonbeam is the short film “The Confetti Myth”, written by Gavin Starr Kendall. This tart, shocking little comedy is based on an actual school assignment completed by Kendall and is the perfect palate cleanser between shows.

Drawn Out Storytelling is a multi-medium show, that’s part storytelling slam, part art installment and part concert. As each engagingly self-deprecating storyteller takes the mic, a quartet of fine musicians with the best hairstyles Brooklyn has to offer kick out an accompanying soundtrack. Meanwhile, artists work ferociously to create work inspired by the stories being told.

I once showed a friend some anime based sketches I had drawn in my journal, and he called me a “wizard”. If that’s the case, then the artists of Drawn Out Storytelling must be denizens of Asgard. There is something essentially magical about drawing: the ability to conjure images out of thin air. Watching images come to life while a story unfurls gives Drawn Out Storytelling a giddy rush that is strangely inspiring.

Drawn Out Storytelling tells different stories and creates new art each night. If this show were an X-Man, it would be Husk (is Husk still an X- man?), constantly tearing off its own skin to reveal something different and unexpected each time. That’s more exciting than a show that resembles, say, Beak. Poor Beak.

And thus ends my reviews for the Brick’s Comic Book Theater Festival. I feel relieved, and yet sad. What will I do with my life now that the Festival is over?

Join me next week when I start my reviews for Gameplay, the Brick’s video game theater festival!