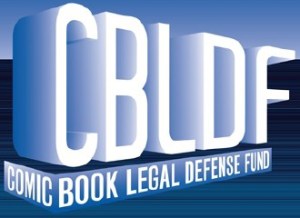 Let’s tell the story of a young man, an American computer programmer with an enthusiasm for comic books, who decides to take a trip to Canada. Upon encountering Canadian Customs, an officer conducted a search of his belongings and discovered manga on his laptop. Believing it to be child pornography, the officer obtained a warrant for the seizure of the laptop, and the young man in question is now facing charges of possession of child pornography and its importation into Canada. He could face a minimum of one year in prison.

The Comic Book League Defence Fund–described on its website as a “nonprofit organization dedicated to the preservation of First Amendment rights for members of the comics community”– is taking on the case, forming a coalition to support the legal defense of the young man and the larger issues that have sprung up around the case.

On those issues, CBLDF’s Executive Director Charles Brownstein says that this goes far beyond one twenty-something and his comics:

This is an important case that impacts the rights of everyone who reads, publishes, and makes comics and manga in North America. It underscores the dangers facing everyone traveling with comics, and it can establish important precedents regarding travelers rights.  It also relates to the increasingly urgent issue of authorities prosecuting art [representational images]as child pornography [images made by directly exploiting children].  While this case won’t set a US precedent, it can inform whatever precedent is eventually set.  This case is also important with respect to artistic merit in the Canadian courts, and a good decision could bring Canadian law closer to US law in that respect.  With the help of our supporters, we hope to raise the funds to wage a fight that yields good decisions and to create tools to help prevent these sorts of cases from continuing to spread.

Currently the CBLDF’s board of directors is planning to help by raising funds for the defense, which is estimated to cost around $150,000 CDN. They are doing this in conjunction with the recently re-formed Comic Legends Legal Defense Fund.

To learn more about the case at hand, go here.