You guys wanna go to the quad and devour some brains? 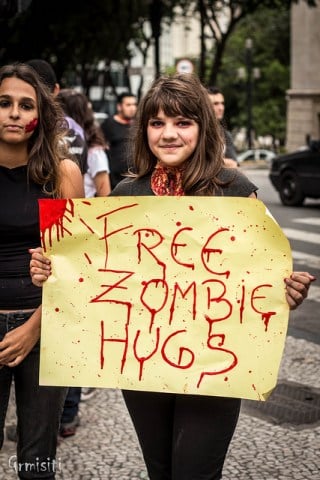 Ah, college. It’s a time for sexual exploration, academic engrossment, and  preparing oneself for the coming apocalypse. Michigan State University now offers a religious course in zombies, because apparently college kids only care about their brains when they’re protecting them from the undead.

Philosophy and religion professor Kelly Murphy said in a university-wide press release that the course, offered for the first time this semester, focuses on “thinking about the end and imagining life in a different way[…] something that humans have always done.”

Called “From Revelation to “The Walking Dead”‘, the course uses pop culture to create interest in religious texts and spur theological and ethical discussions. (Killing a walker: yay or nay?)

Explains Murphy, “The prevalence of apocalyptic stories in various media gives us a window into what people are worrying about, what they hope for and how they imagine they would react in the face of a cataclysmic event. In the same way, we can read the Book of Revelation … and learn what ancient Jewish and Christian groups were concerned about.”

Yes, because there are definitely no figures in religious texts who rose from the Dead to walk among the living. Nope. Sorry, Kanye.