Mathematicians Wrote a Paper On Zombie Survival | The Mary Sue

Mathematicians Wrote a Paper on How the Zombie Apocalypse Won’t Kill Us All, Made Us Grateful for Math

Wait, could we have majored in zombie math? We've made a huge mistake. 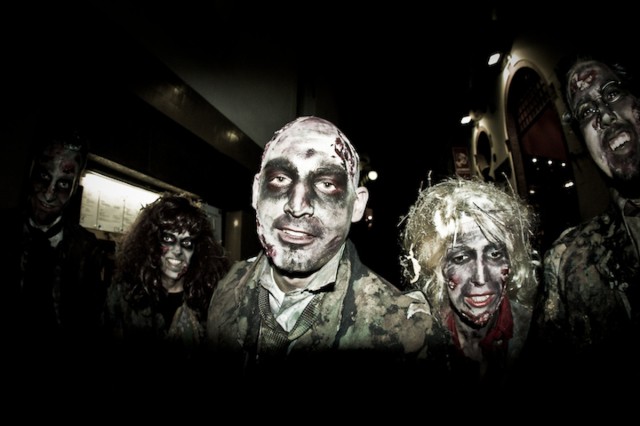 For their paper, which was published on the arXiv pre-print server, the two sat down and binge-watched zombie movies, which makes us very jealous that we didn’t pursue a career in mathematics. They came to the conclusion that there are two separate kinds of zombie plagues: the Dawn of the Dead kind, where dying turns people into zombies whether they’ve been bitten or not, or the Shaun of the Dead kind, where a person needs to be mauled, or at least bitten, by the undead to become a zombie.

Hey, if they’re going to save us all, they need to be specific with their zombie math.

By using data from outbreaks of real diseases like the flu, they were able to extrapolate that both types of zombie apocalypse would eventually run out of victims before killing everyone. That’s the part where they disagree with Philip Munz’s 2009 paper “When Zombies Attack!: Mathematical Modeling of an Outbreak of Zombie Infection,” which claims humans can never win in a zombie apocalypse.

Both papers use the same model of breaking the population down into who’s susceptible to infection, who’s infected, and who has been removed from the equation. Where they differ is that Witkowski and Blais have more faith in our ability to shotgun and decapitate zombies right out of the “infected” group and into the “removed” group, where Munz’s keeps the zombies from ever being truly removed.

Of course, in the Dawn of the Dead model, we’d also have to destroy the brain of everyone who died from then on to keep that “infected” group in check, but that’s a pretty small price to pay for preventing the destruction of humanity. The cremation industry would probably get a big bump from it, too. Who wants to take the chance that their loved one just isn’t dead enough?

As long as we can all handle this, we’re fine.

It wouldn’t be an easy fight, but they’re sure we’d eventually see the infected group stop growing, while the number of susceptible people would diminish, leaving us to carefully clean up the mess. For their part, Witkowski and Blais wrote their paper, because they think zombie movies and the zombie apocalypse are a great way to get people interested in real disease outbreak prevention. We couldn’t agree more, and that will absolutely be our new excuse for all the zombie movies we watch. It’s for science.