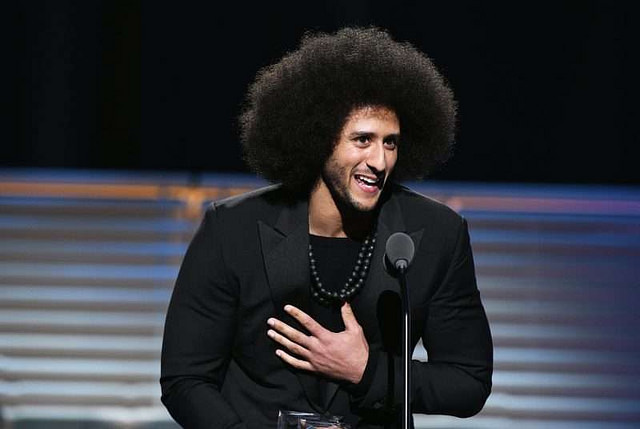 Tuesday night, Beyoncé presented Colin Kaepernick with Sports Illustrated’s Muhammad Ali Legacy Award. The award is meant to honor “individuals whose dedication to the ideals of sportsmanship has spanned decades and whose career in athletics has directly or indirectly impacted the world.” Beyoncé’s appearance was a surprise for Kaepernick and the crowd. It was honestly a delight for all of us who are fans of Queen B and supporters of Kaepernick’s “take the knee” protest that has brought to the public forefront the ways in which black athletes are treated when they take a stand.

‘With or without the NFL’s platform, I will continue to work for the people’@Kaepernick7 receives SI’s Muhammad Ali Legacy award #Sportsperson https://t.co/3wqaUVYZnf pic.twitter.com/dKJNX0d8vi

Sports Illustrated rebranded their legacy award as the Muhammad Ali Legacy Award in honor of the late athlete and activist, whose political protests during the Vietnam War were hugely influential to other athletes at the time. Ali (who was born Cassius Marcellus Clay Jr. and converted to Islam as an adult), was outspoken about not wanting to join the war to fight other people of color when white people at the time were still lynching black people in America.

Ali’s statements and actions were subject to much controversy, which only increased as his friendship with Malcolm X grew. Yet, Ali would not abandon his personal morals and ideas as a black man in order to be a successful athlete (a sentiment O.J. Simpson did not share). Kaepernick is definitely Ali’s successor. He went from being one of the few black quarterbacks in the NFL for the 49ers to not being signed. While some have tried to say it is because Kaepernick wasn’t “that good,” Packers quarterback Aaron Rodgers (Go Pack Go) said, “I think he should be on a roster right now. I think because of his protests, he’s not.”

Still, that has not stopped Kaepernick from speaking out and continuing to stand by his principles.

In addition, I have to say that Beyoncé has always done a lot to use her platform to promote blackness and support black artists, which isn’t easy when you are one of the most popular female artists on the planet. There is a lot to lose, and some have lost already, while others have stayed silent for fear of turning anyone off. Yet Beyoncé has transcended to a place where she can a make an album that is all about black womanhood, that protests police brutality, and still become one of the highest-paid women in music.

During the introduction, Beyoncé addresses the idea that Kaepernick and the others who have taken a knee are protesting America.

“It’s been said that racism is so American that when we protest racism, some assume we’re protesting America. So let’s be very clear,” she said. “Colin has always been very respectful of the individuals who selflessly serve and protect our country and our communities and our families. His message is solely focused on social injustice for historically disenfranchised people. Let’s not get that mistaken.” (via HuffPo)