Just Like a Lot of Humans, Coelacanths are Mostly Monogamous and Don’t Mate With Relatives 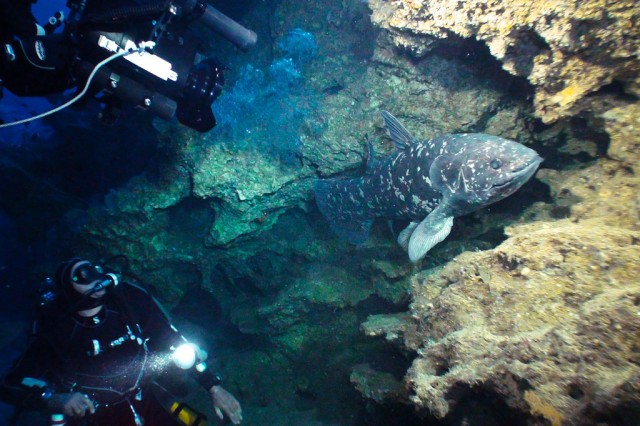 German scientists have been hard at work analyzing the genetic makeup of coelacanth offspring to learn more bout their mating patterns. What they found is that the coelacanth generally isn’t into the multiple mating scene — which is pretty unusual, as most fish species love to get all up in one another’s gills. Get it? Gills? Aaaaah.

In a report published recently in Nature Communications, Dr Kathrin Lampert from the Ruhr-Universität Bochum and Prof Dr Manfred Schartl from the University of Würzburg teamed up to study the mating customs of the now-iconic definitely-not-extinct species. Coelacanths are still hard to track down, of course, so they ended up getting ahold of a small sample size — two pregnant coelcanth females who’d accidentally been caught by fishers off the coasts of Zanzibar and Mozambique. One of the fish had 26 embryos inside her; the other, 23.

In analyzing these specimens, the team found that many of the embryos in either group had extremely similar genetic markers. With a method commonly used in paternity tests, they found that all the offspring for each fish must have been sired by the same father, which means that the female fish only mated with a single male fish. Most other species practice multiple mating in order to increase the likelihood of producing offspring successfully, so you’d expect to see groups of embryos with many different partners. Instead the coelacanth appear to be monogamous during their mating season. I hope that you’re also picturing a bunch of coelacanth coupled off in stereotypical ’50s sitcom fashion right now, because that’s what I am currently picturing and it’s delightful.

In analyzing the genetics of these offspring, the researchers also determined that the female fish and male fish had very different genetic markers from one another, leaving them to speculate that female fish avoid mating with their close relatives. Yup, that’s right — no fishy incest for the coelacanths. You know, except for Cerseicanth Coelannister and her brother. They do their own thing.

(via Phys.org, image via Earth Touch)