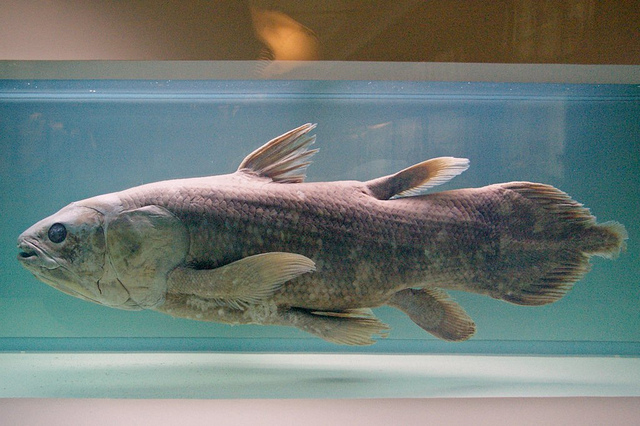 An international team of researchers have sequenced the genome of the a living fossil and one of the coolest, oldest fish to roam the seas — the noble coelacanth. Beyond triggering our excitement over pretty much any living fossil-related news, better understanding the DNA of this ancient fish could offer researchers a glimpse into how the earliest land animals made their way out of the primeval seas — an impressive feat, even if it was only onto the equally primeval beach.

Once thought to have been extinct for more than 70 million years, a living coelacanth was dredged up by a fisherman off the coast of South Africa in 1938. Luckily for all of us, the fisherman ignored what  must have been his initial instinct to toss the four-foot-long fish, which looks like a waking nightmare, back into the ocean and pray to whatever god would listen that he could one day forget staring into its cold, alien eyes.

Okay, the eyes may be creepy, but they’re not that alien. In fact, with their fleshy, lobed fins, coelacanths are more closely related to humans than they are to fish like tuna. They’re also among the closest living relatives we know of to the first animals that crawled from the sea onto land, meaning that their DNA could hold a number of clues about how fins made the eventual transition to limbs. The genome study showed that lungfish are more closely related to the early tetrapods who were living on land before it was cool, but it’s unlikely their genome — which is much larger and more complex than that of the coelacanth — will be sequenced any time soon.

One of the most impressive things about current coelacanth species is how little they have changed genetically in the last 70 million years, meaning that the genomes of current coelacanths are more or less identical to their ancient progenitors, which is especially helpful for researchers trying to determine how the relatives of those fish made it to dry land.

That may be because coelacanths dwell so deep in the ocean that not much has really changed about their daily life in tens of millions of years, because the bottom of the ocean is pretty damned boring. According to the genome study, published this week in the journal Nature, this boredom has produced a great model for the relatives of early tetrapods, and confirmed that coelacanths and tetrapods share genes that promote limb development. So hey, thanks for that, bottom of the ocean.