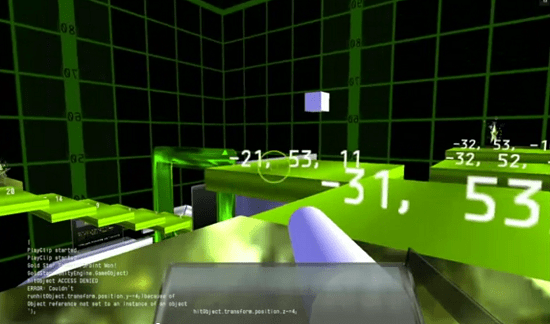 Educational video games are an important part of video gaming history. I mean, how many of us grew up without playing a little Math Blaster, or Reader Rabbit, or OutNumbered!? Of course, these are generally aimed at children, but with Rock Band and Rocksmith endeavoring to teach people of all ages to actually play instruments, we’re seeing the educational spectrum really open up. What better time for Code Hero, a game that strives to teach you to code video games, and does that from inside a video game. [Obligatory “yo dawg.”]

While Code Hero has been kicking around for a while now, it just got enough money to become a reality thanks to the Tim Schafer equivalent of the Colbert bump, which has blessed a massive number of video game Kickstarters with a spike in funding. Blowing past its $100,000 goal, Code Hero is now shooting for $200,000 in order to create some kind of multiplayer.

As for the singleplayer, the part of the game that’s guaranteed to exist, players will run around a Tron-style, Hey-I’m-inside-of-a-computer-in-a-very-80s-sort-of-way world shooting things with a code gun. What’s the code gun do? Whatever you code it to do, which seems to be the game’s main mechanic. While there’s certainly an action aspect to it, that’s all backed up by some prerequisite coding in a variety of languages that should help players gain a working knowledge of programming.

So if you’ve ever wanted to learn to code, specifically video games, but you can’t bring yourself to try and learn without the crutch of a game, Code Hero might be the route for you. You can check it out on Kickstarter and throw down if you want to. As of this writing, there’s still about 15 hours left. Get ready to use the flashiest compiler ever.