Cobra Takes To Kickstarter To Rebuild After Latest Foiling By G.I. Joe 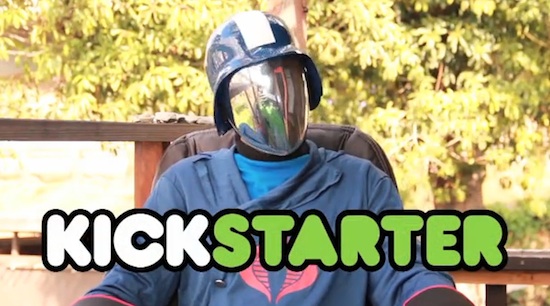 Times are tough for terrorist organizations right now, especially the long suffering agents of Cobra. These guys can’t catch a break any more than they can hit the broad side of a barn with a volley of laser fire at fifteen paces. No longer a force that can intimidate world leaders out of money and having apparently alienated the venture capital community, the organization has taken to Kickstarter in an effort to crowdsource funds for their latest nefarious plot for world domination. If that sounds like something you’d like to get behind, keep reading to hear the full pitch from Cobra Commander, or at least a reasonably effective impersonator.

Just $200 in support for the world’s second least competent terrorist agency (sorry, A.I.M.) means that ninja Storm Shadow is at your beck and call for a week, which is really deal of the century material. I don’t know about you, but having your own ninja servant for a week sounds like about the best Kickstarter reward I’ve ever heard of. Seriously, one week with a ninja at my command? I could get months of work done in that week. You know, so long as the work I had to do involved sneaking, climbing walls, and performing ninjitsu. You’d be surprised how often that is the case, though. I know I am.

$1000 can net you your own Cobra identity. This is, of course, something I have coveted since childhood, and I don’t think I’m alone in that, and even larger donations can lead to…less wholesome rewards. You know what, just watch the video.

Now the current project is just a live draft courtesy of some funny folks calling themselves Dumbshit Mountain, so you can’t actually send any money to Cobra just yet. Which is probably good news–after all, that would probably be providing material support to terrorists, which last we checked was frowned upon by the government. Yes, even if the terrorists in question are like adorably incompetent.