CNN Is Upworthy Now and Everything Sucks

We would have made a mocking Upworthy-style parody headline, but we're better than that. 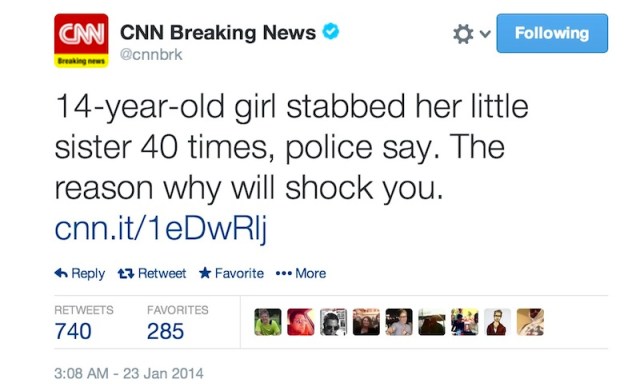 We here at Team Geekosystem like to make fun of Upworthy—not because we don’t think trying to make social justice viral content isn’t commendable, of course; it’s because we hate their manipulative headlines. Even worse, we fear that other sites might try to use the same tricks to make us click on them. As it turns out, that fear is justified.

CNN tweeted this message out to its 15 million followers from their breaking news Twitter feed at 3 in the morning EST. It’s still up, too:

14-year-old girl stabbed her little sister 40 times, police say. The reason why will shock you. http://t.co/5ZFqHFrviw

So, what’s the shocking conclusion to this clickbait? This is the real headline. (We took the screenshot from Hypervocal, because we refuse to reward CNN by clicking on anything in this situation): 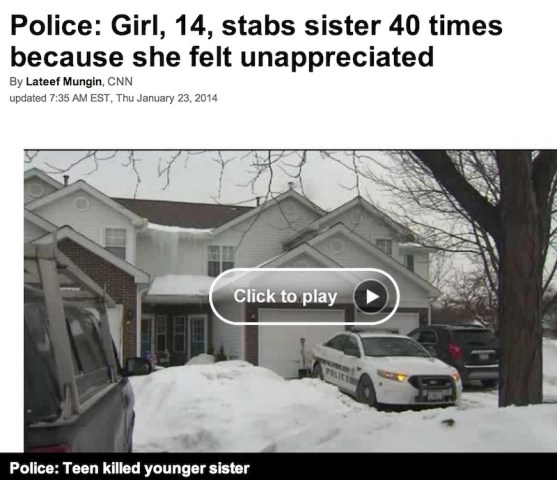 That’s not shocking. That’s the plot to at least four or five different Law and Order episodes, and it’s also, you know, about people getting murdered.

Now, we suppose you could make the argument that it was 3 in the morning and CNN’s Twitter manager just wanted to try something different and see if it worked, but this is also CNN we’re talking about. Despite their best efforts to disappoint us, we still expect them to have a certain level of journalistic integrity, even when it comes to Twitter. Suddenly using the “what happened next will shock you!!!” gimmick for what’s arguably a pretty cut-and-dry crime story is pretty far away from that standard.

Heck, even Upworthy  founding curator and Editor At Large Adam Mordecai is judging them for the tweet.

Dear CNN https://t.co/B0edardjf3 The curiosity gap is not for every news story. Especially about murder.

If even the guy who invented the crappy gimmick thinks you did a bad job of it, then you need to reevaluate yourself.

UPDATE: Adam Mordecai and everyone at Upworthy would like for me to tell you that he did not invent clickbaiting as we originally mockingly suggested above. He just happens to be very good at it.