Clarissa Explains It All Book | The Mary Sue

Clarissa, Now Grown Up, to Explain It All in a New Book 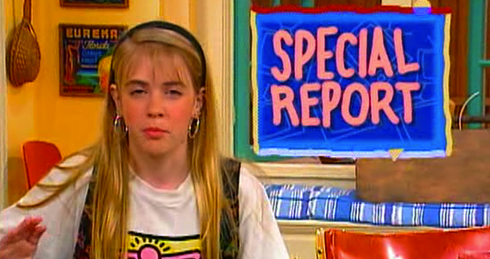 Time to break out your loudest clothing, because Clarissa Darling is back. In a book, not a TV show. But still. Way cool.

The writer responsible for this glorious surge of ’90s Nickelodeon nostalgia is Mitchell Kriegman, who created Clarissa Explains It All back in the day and has now written Things I Can’t Explain, in which Clarissa is a 23-year-old aspiring journalist who “deals with the obstacles toward becoming a real adult:

finding and keeping a job in a turbulent economy, the luxury of a first apartment without roommates, figuring out how to deal with parents all over again, and unexpected feelings for a really cute guy who — of course — has an on-and-off again girlfriend.”

That all sounds very “generic girl-in-the-city rom-com”-ish but hey, all we have so far is a two-sentence description. And, really, it fits pretty well with the show, the strong suit of which was never original plots. (I vaguely remember an episode where Clarissa wanted to go to a Pearl Jam concert and another one where Ferguson sued a bunch of people. But that’s it.) It was Clarissa: Snarky, oddly-dressed, computer game-playing Clarissa, who would just… talk about her life to complete strangers before blogs even existed. She was ahead of her time, that one.

As EW points out, the book’s premise is similar to that of the 1995 CBS show Clarissa Now, in which Clarissa moved to New York City to intern for a newspaper. But whereas the show’s pilot never made it to the masses, the book will be coming out in Fall 2014.

Good thing, too. I have so many questions about what happened to Clarissa and the rest of them. Has she kept her propensity for neon? Is Ferguson still the little snot he always was?  Do Clarissa and Sam stay in touch? Does Clarissa play Mass Effect now?