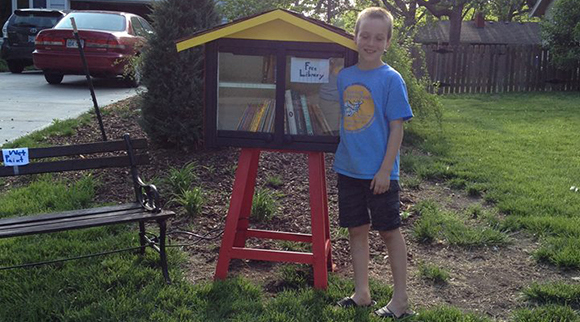 Just look at this picture. Look at this little boy and his little home-made library and the great big potential for learning and imagination it contains. Unfortunately, the world’s most adorable book collection has been shut down by the city of Leawood, Kansas for violating “illegal accessory building” laws. Pssst, bureucrats…SHHHHHH! YOU ARE IN A LIBRARY!

9 year old Spencer Collins set up the “Little Free Library” in his front yard so the community could share in his passion for reading. Spencer told KMBC that he was inspired to start the project because books make him feel like “I’m in a whole other world, and I like that. I like adventure stories because I’m in the adventure and it’s fun.” Get a load of some of the great titles he had available to the community in his collection: 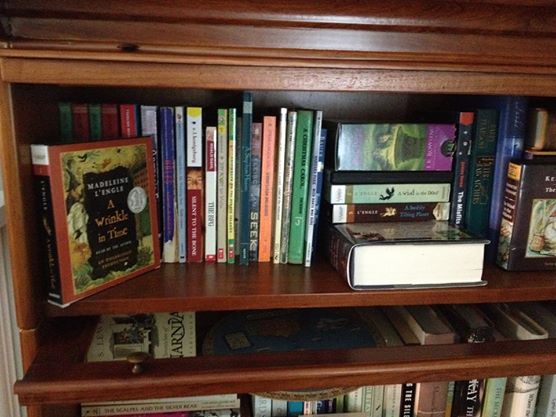 Sadly, Spencer’s mom says that when the family returned from vacation recently “there was a letter from the city of Leawood saying that it [the little library that could] was in code violation and it needed to be down by the 19th or we would receive a citation.” The bookshelf, which operates on the awesome “Take A Book, Leave A Book” philosophy, was deemed an “accessory structure” by the city. Accessory structures are banned in Leawood unless they’re attached to a home (so forget about tree houses, I guess?).

Richard Coleman of The City of Leawood explained the Library’s shutdown to KMBC:

We empathize with them, but we still have to follow the rules […] We need to treat everybody the same. So we can’t say if somebody files a complaint but we like the little libraries — we think they’re cute — so we ignore it. We can’t do that.

“Ignoring it” is, in fact, what surrounding communities have done in similar situations. Nearby Prairie Village reportedly does not enforce codes that would impact free libraries.

Thankfully, Spencer has some innovative ways to challenge the city: “I thought, why not get a rope and attach it to our house and the library?”

The 9-year-old also hopes to appeal to the better natures of the folks at City Hall: “I would tell them why it’s good for the community and why they should drop the law […] I just want to talk to them about how good it is.”

A Facebook page has also been set up to “Help Spencer work with Leawood, Kansas to amend its city code to allow Little Free Libraries!”

Does anyone know LeVar Burton? Surely he could pull some strings.