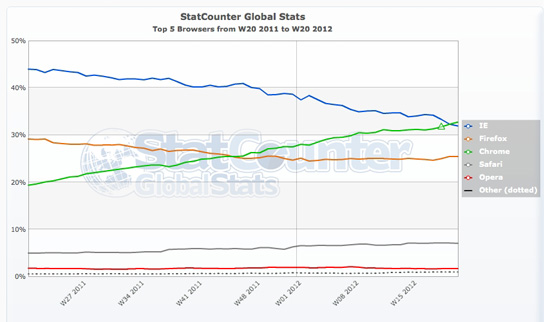 According to the web usage tracking site StatCounter, Google’s Chrome browser appears to have just snatched the title of the most used web browser in the world from Microsoft Internet Explorer. Though measuring web stats is a tricky business, StatCounter indicates that Chrome was above IE for a sustained seven days — from May 14 to May 20. The Internet is changing, folks.

Chrome has maintained a steady rise since it was introduced all the way back in 2008. By December of last year, it had managed to overtake the once-essential Mozilla Firefox and was still on the rise. Meanwhile, IE has continued to slide downward. Interestingly, Safari — though a distant fourth place — has been rising ever so slowly.

Depending on how you jiggle the numbers — daily use versus weekly use, the latter of which is shown above — Chrome’s lead is less clear. However, it is at worst neck-and-neck with IE, both coming in around 33%. What’s scary for IE is even if these current numbers are slightly skewed, Chrome is certainly trending in that direction.

The Verge points out, however, that Chrome’s predominance is mostly by a slim margin when you look at the stats on a more local level. According to StatCounter, Chrome is only slightly ahead in Europe, slightly more ahead in India, but accounts for an astonishing 50% of use in South America. Meanwhile, Google’s browser continues to fall behind in North America, Asia, and Africa.

Such a close race could mean that these numbers may swing back at any time. However, given Chrome’s apparently inevitable upward trend, that’s hard to believe. Can IE withstand the next Update Your Parent’s Browser Day? We’ll see.

(The Next Web, via Techmeme, The Verge)