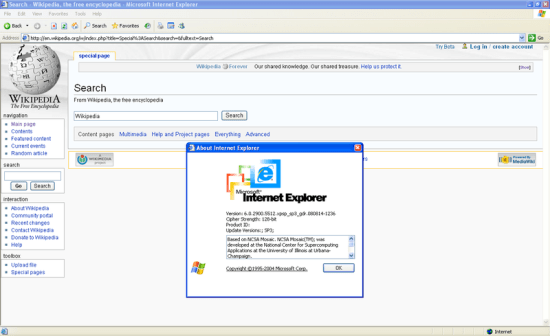 While most folks will likely still be in a food coma or trampling over each other to get the sweetest deals the day after Thanksgiving, why not take a moment and do something charitable? You know, something everyone can appreciate. This November 25th, sit down at your parent’s computer and celebrate Update Your Parents’ Browser Day by updating your parents’ browser.

The concept was first floated yesterday by Atlantic editor Alexis Madrigal, who specifically named the aged and infirm Internet Explorer 6 as the target browser for updating. Considering that most modern browsers already feature auto-updating, browsers similar to IE6 are the obvious choices. Though because few browsers originally released in 2001 are still around, IE6 might stand alone.

Microsoft has even thrown their weight behind this endeavor, having released a list of ten tactics to distract your progenitors and keep them away from their computers long enough for an update. Here they are, from the Internet Explorer blog:

10. When they’re manning the fire extinguisher dealing with the yearly deep-fried turkey accident.

9. When they’re telling your cousins “when I was your age” stories.

8. When they’re face down in the eggnog punch.

7. When they’re fighting over the right way to carve a turkey.

6. When your mom kicks you out of the kitchen for peeling potatoes “the wrong way.”

5. When they’re sent to the grocery store at 2PM on Thanksgiving Day for extra cranberries.

4. When they’re sitting at the Adult’s table (rally the other kids to help).

3. When they’re standing in a Black Friday line.

And the number one time to update your parents’ browser is…

The question that will surely spring to the mind of those who have already abandoned Internet Explorer is, “why not install something else like Firefox or Chrome?” Well, friend, you could do that, but then you’d have to dedicate hours to carefully explaining to your parents how to use this strange new method of perusing the Internet. If you’re willing to become the sole person your family goes to for help, then by all means take that plunge. If not, then quickly in and quickly out is all the advice I can give you.

(Atlantic via Geekwire, image via Wikipedia)