Chrome for iOS Shoots to Number One App in One Day, But is it Any Good? 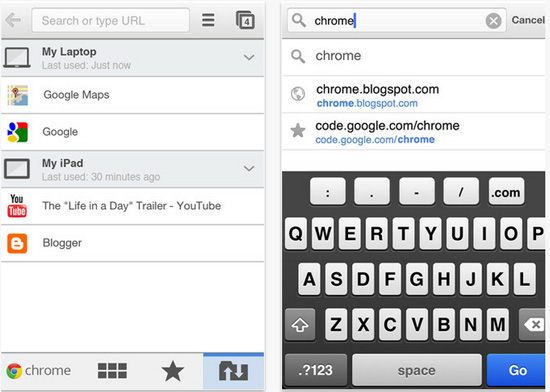 At Google’s I/O conference yesterday, the company announced that an iOS version of the much beloved Chrome browser would be available in the app store. Released several hours later, the app quickly became the most downloaded app on the store. However, if you’re expecting the lightning-fast desktop browsing experience you’ve come to expect, you might be disappointed.

It’s important to remember that in the iOS walled garden, not all apps are created equal. As BuzzFeed FWD points out, Apple sometimes reserves the most powerful resources for its built-in apps:

The obvious problem here is if you’re not using the mobile version of Safari, then you don’t have access to Nitro. This is partly why the in-app browsers — like when you click a link in Twitter — seem so janky. Instead of super-fast Nitro, they get the adequate but antiquated UIWebView. In FWD’s JavaScript benchmark tests, they found that Chrome took 6,863 milliseconds to execute a JavaScript test while Mobile Safari took a mere 1,784 milliseconds.

Of course, the Internet is more than just JavaScript, but the point is that Chrome on iOS is probably unable to perform at its full potential.

However, if you’re someone who uses Chrome as their primary browser on a computer, then slightly degraded performance may be worthwhile because of changes coming in iOS and the Mac OS. Apple has already announced that in iOS 6 and OS X 10.8 (Mountain Lion) you’ll be able to move seamlessly from tabs on your phone to tabs on your computer — if you’re using Safari and Mobile Safari.

Chrome for iOS (in addition to many swanky features like password synching, incognito browsing, infinite tabs, and a slick design) brings the same tab-synching functionality right now. Next fall when the new version of Mobile Safari drops, you can keep using Chrome without losing this extremely useful functionality.

Providing these capabilities is no doubt part of why Google opted to launch Chrome on iOS. With OS X 10.8 and iOS 6 in the offing, Apple is going to make a big push to keep users on Apple software on Apple machines — and has provided a lot of goodies to bring all us errant souls back into the fold. By pushing out those features now, Google can keep its foothold on Mac computers and expand onto iOS.

There is, unfortunately, one catch: Unless you jailbreak your iPhone, there is no way to change its default browser. As such, you’ll never enjoy the ease of simply clicking on a link and having it launch in a browser. I have a sneaking suspicion that having to copy-paste URLs all the time will eventually lead all but the most determined back to Safari.