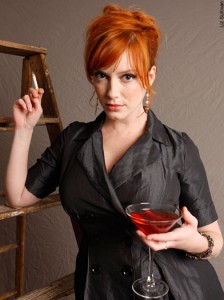 “I grew up on the TV show, and I had Wonder Woman Underoos, and my brother had a Wonder Woman doll — sorry, Aaron, you’re exposed. And Nicolas said, when we were on set, ‘I want you to be Wonder Woman.’ And I think he is such an extraordinary and exceptional director, that if he asked me to do it, I would do it in a heartbeat … Hopefully the stars would align. It would be really fun. It would be cool, wouldn’t it? I’d get to kick ass.” — Christina Hendricks, who is in Drive, which opened this weekend and is directed by Nicolas Winding Refn, who has said he would like to do a reboot of Wonder Woman with Hendricks as the lead, and it might just happen if his reboot of Logan’s Run is successful. Hendricks is also nominated for an Emmy tonight for her work on AMC‘s Mad Men, so let’s wish her some good vibes and transfer those vibes to the Logan’s Run reboot so she can then become Wonder Woman.