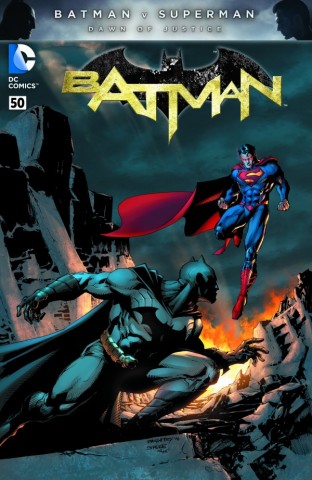 You may know Chris Daughtry best for his music, or at least for being one of the success stories to come out of FOX’s American Idol. But did you know that he’s also a visual artist who’s dreamed about drawing comics? Well his dreams came through this week on a special variant cover on Batman #50 celebrating the release of Batman v Superman.

It all started when Daughtry (still on Idol at the time) connected with comics artist Jim Lee on MySpace (remember that?). They struck up a friendship over the years and even drew for each other – Lee drew album art for one of Daughtry’s albums, Daughtry contributed a drawing to a charity auction at Lee’s request, etc.

Daughtry’s been a fan of Batman since he was a kid, and his Instagram is rife with comics characters and geek references. So…he admittedly started bugging Lee about the possibilities of drawing something – anything – in comics.

According to an interview with Uproxx, Daughtry says:

I kept talking to him about possibly doing variant covers. I kind of hounded him a bit. We ended up being together at this Halloween party and he asked ‘Would you be interested in doing a cover in March of Batman v. Superman to help promote the movie?’ Of course, I said yes.

So Daughtry began drawing, working around his recording schedule and staying up until all hours. He was so excited as he made progress that he shared bits and pieces as he worked:

Now, the variant covers are out for the world to see. Not bad for a comics newbie!

Lookie what came in the mail today!!!!! Cannot explain to you all how good this feels! Thank you again @jimleeart for entrusting me with this task and elevating my art with your inks. You are a man among men sir! @sinccolor the colors turned out GORGEOUS! @choisez thanks for everything! In comic stores THIS WEDNESDAY! Boom! Getchu some!

Of all the accomplishments I’m most proud of, this EASILY sits in the top 5! I’ve dreamed of this moment since I was 5 years old. Never in my wildest dreams did I ever imagine doing NOT ONLY a cover for Batman BUT WITH MY HERO!!??? The guy who made me wanna draw comics! I can’t thank you enough @jimleeart for this amazing opportunity, for guiding me, listening to me stressed out at 2am, for elevating my work with your amazing inks and just being a friend. @sinccolor you never cease to amaze me with your amazing eye for color and mood! Thank you again. And can’t forget the ever so helpful @choisez! It was AMAZING being a part of bringing this cover to life! RELEASE DATE: MARCH 23rd! @dccomics @dcentertainment @batmanvsuperman #batmanvsupermandawnofjustice #Batman #50 #batmanvsuperman #superman

Congrats to Mr. Daughtry on living the geek dream!