Throw Another On the Pile: Chinese Company Sues Apple for Patent Infringement Over Siri 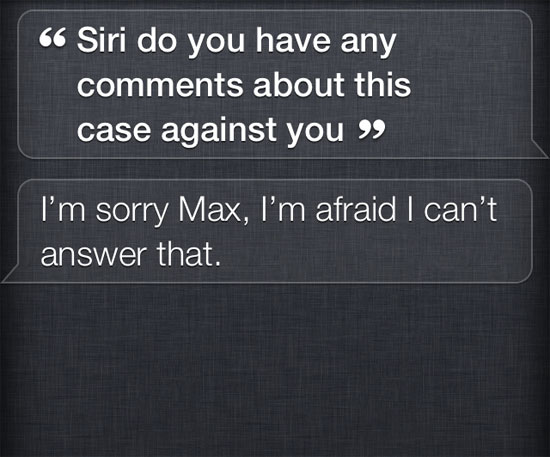 There just seems to be no end to the cases of Chinese companies filing suit against Apple for various infringements. This latest comes from Zhi Zhen Internet Technology and for once isn’t about a name. Instead, they claim that Apple’s digital voice assistant Siri infringes on their talking assistant Xiao i Robot. For her part, Siri remains tight-lipped about the case.

The announcement of the suit comes fresh on the heels of Apple adding Mandarin and Cantonese language support to Siri, which was announced at WWDC 2012. In an interview with Macworld, Zhi Zhen chief Yuan Hui said that Xia i Robot boasted 100 million users in China and simply requests that Apple cease its allegedly infringing action.

Macworld’s report goes on to say that Zhi Zhen contacted Apple about their patent issue in May. The nature of their discussion, if any, has not been made clear and the company filed a suit in June.

For those keeping score at home, Apple already paid out $60 million to the Chinese company Proview over the iPad name. Shortly thereafter, a Chinese toiletries company whose name translates to Snow Leopard  also filed suit. However, both of these claims seemed litigious at best. Proview, for instance, had not produced their all-in-one computer called iPAD since 2009. Snow Leopard is only just now filing a claim, despite OS X 10.6 “Snow Leopard” rapidly being phased out of the Mac ecosystem.

However, Zhi Zhen is an interesting case as they seem to actually produce something similar to Siri. That would seem to indicate that they not only have a legit claim against Apple, but that they could score some sweet licensing fees from the computer maker if the court agrees.

There’s no word on a court date, but I can almost guarantee that we haven’t seen the last of these Chinese lawsuits.