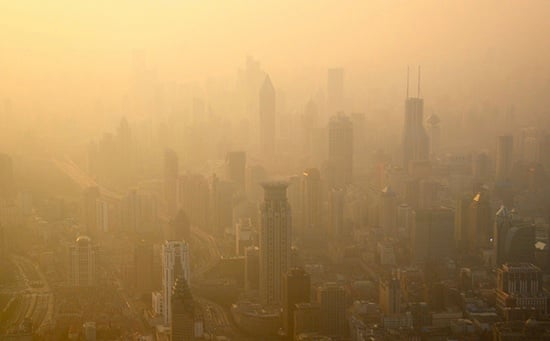 Smog is increasingly a public health concern in many Chinese industrial centers and metropolitan areas, as you can see from the above picture of what we’re told is Shanghai. That concern took on an unexpected dimension earlier this week, though, as smog in the nation’s Zheijiang province prevented residents from noticing that a building was actively burning down. On Monday, a fire at a furniture factory in the province burned out of control for three full hours before anyone even noticed the smoke through the smog that regularly blankets the region.

“Because of the thick fog pervading the air at the time, the initial smoke and flames produced by the fire took an unexpected almost three hours to be discovered by nearby residents.”

Once firefighters were alerted to the fire, it already had a pretty solid head start, growing into a pretty serious set of flames. Ultimately, it took first responders ten hours to extinguish the blaze, which consumed one hell of a lot of furniture, but so far as we can tell, claimed no lives. The same can’t be said for a 20-car-pileup in the province that killed two and is being attributed to reduced visibility from the dense smog, a factor that has also caused the cancellation of flights out of the province.

This week has been the worst on record for smog in many parts of China, including the capital Beijing, which is currently suffering from levels of smog 25 times higher than the limit considered safe in the United States and causing massive waves of respiratory ailments. This week’s smog and the health problems that accompany it may finally light a fire under Chinese administrators and government regulators who have so far been unwilling to strengthen air quality standards.

That seems about right, really. We’re no experts, but when there is a furniture factory burning down and that just seems, atmospherically speaking, like how your day normally is? The time has probably come for steps to be taken.