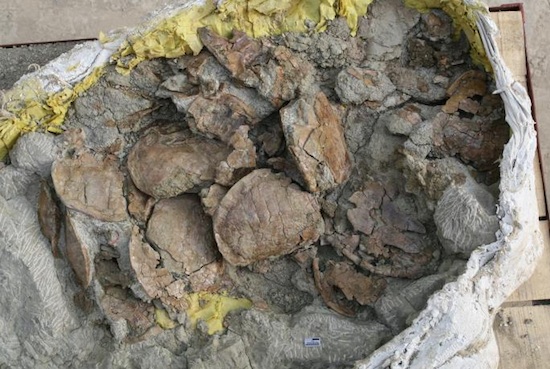 One of the things that makes it most difficult to gather information from fossils is how few examples of a given creature paleontologists generally have to choose from. That’s not an issue for mesa chelonia turtles from the Jurassic era anymore, though, as researchers digging in China have found a “bone bed” of the fossil reptiles stacked atop one another, offering a rarely seen fossil bonanza that could offer an unheard of amount of reliable data about the shelled fossils.

The research team from the Berlin Natural History Museum has travelled to the same fossil-rich area where the bone bed was discovered several times in the past few years, turning up finds like dinosaurs and ancient crocodiles. This turtle bone bed, though is among the most prized finds, as it holds so many samples that the team can do real meaningful analysis from just this one find, strengthening it with data from other sites.

The team suspects that these ancient turtles were demonstrating a behavior fairly similar to modern turtles — gathering in the last available pool in the area and waiting for a dry spell to end. It seems these specimens couldn’t hold out long enough, though and many succumbed to starvation, dying in a pile that was preserved when the rains eventually did come, turning the watering hole into a mud pit in short order. As is so often the case though, misfortune for an ancient critter is a stroke of luck for modern archaelogists.