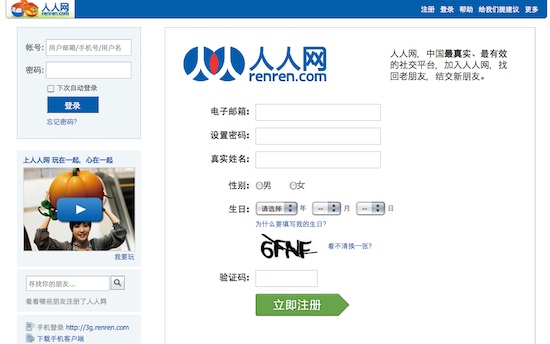 A July report published by a Chinese government-affiliated think tank denounced U.S. and other Western authorities for using social networking sites like Facebook to incite political unrest, and recommended that such sites be investigated more closely.

The Chinese Academy of Social Sciences (CASS) cited unnamed U.S. officials who reportedly said that social networks are an “invaluable tool” for overthrowing foreign governments. Yet for all its unnecessary paranoia over covert cyber foreign policy tactics, the report titled “Development of China’s New Media” also made some interesting observations about user privacy and viral marketing that echo many Internet users’ same fears: that the Big Brother of the future may not be our governments, but private corporations.

This comes on the heels of a recent announcement that military troops are banned from running blogs and personal sites, or using internet cafes and online dating sites. In China, the eerily similar Facebook-equivalent RenRen and other alternatives are largely used for socializing and games; political resistance online, even the casual kind, is rare.

We don’t see an effective social networking-based political resistance occurring any time soon. For instance, as Golnaz Esfandiari noted in a Foreign Policy article, it may be that Twitter in fact complicated the situation on the ground in Iran, inadvertently providing through hash tags the identities of protesters. Language also proved a barrier between local tweeters, often with a considerably smaller following, and the rest of the world.

However, the CASS also perceptively warned against how businesses are now able to collect users’ personal information, generate data about their jobs, marriages, and consumption habits, and market products to them accordingly. This is a good point: Are we giving Facebook more than we want?

Oh, the terrible price we pay for capitalism.