Binge-Watch Over, We Have Questions About Chilling Adventures of Sabrina

**Spoilers for Chilling Adventures of Sabrina season one.**

We’re now well past Halloween, and by now, you’ve had plenty of time to binge-watch Netflix’s Chilling Adventures of Sabrina. (If not, what the hell have you been doing with your life?)

When the adaption of the graphic novel was announced earlier this year, we had plenty of questions, mainly revolving how closely the show would stick to the source material and whether the new series would take any cues from the ’90s TV adaption, the iconic Sabrina the Teenage Witch.

And although many of those questions have been answered (still gutted that Salem doesn’t talk, though), we now have even more questions. Some would say I need to get out more and stop obsessing over the minor details of TV shows, but that’s never going to happen, so let’s continue.

1. Who are Ambrose’s parents?

Ambrose Spellman has been the runaway star of Chilling Adventures. Played by the endlessly charming Chance Perdomo, Ambrose is a pansexual warlock confined to the Spellman family home as punishment for trying to blow up the Vatican in the 1940s.

We get a brief mention of his father and Ambrose’s mysterious backstory in “Over Her Dead Body,” in which he recounts moving from university to university in his teen years after his father was killed by witch hunters. Still, there is no mention of where his father fit in the Spellman family tree.

One thing we can all agree on, however, is that he’s bloody delightful, and hopefully we’ll find out more about his past next season.

2. Why does everyone speak with a British accent?

Don’t get me wrong; as a Brit myself, I LOVE that the Spellmans, and 90% of the other witches, have an English accent … but why?

Is it a throwback from the 1600s, and the Spellmans are just really that old? And if they are, how have their accents not become Americanized over hundreds of years spent living in the states? Both Hilda and Zelda attended the Academy of Unseen Arts, which suggests they grew up in Greendale, not England, but there are several references to them coming from the UK. Like Ambrose, maybe we’ll find out more about their roots next season. 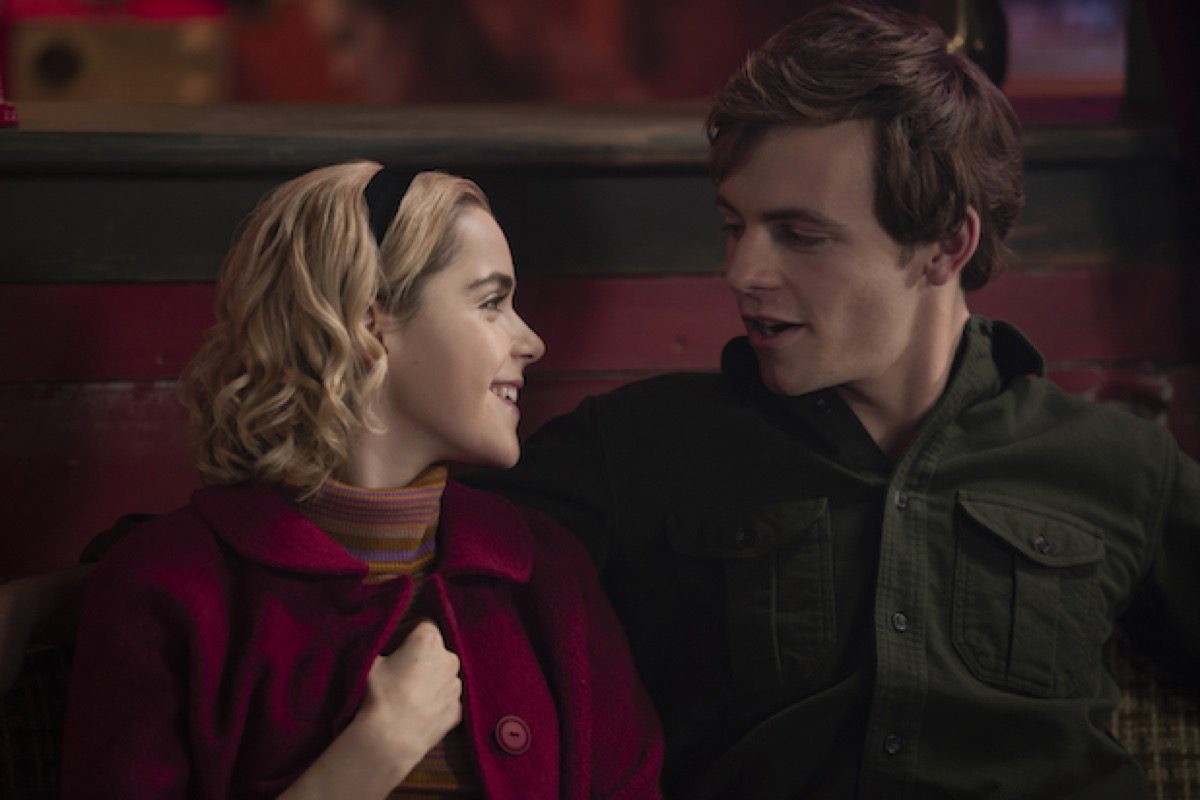 3. Why did Sabrina have to be a virgin?

Still, as the series progresses, we discover that the Church of Night isn’t the safe haven for female witches that it’s made out to be, and there’s plenty of misogyny in the world of magic. Sure, the women walking the path of night are powerful, but they’re still expected to bow down to a male figure. When Sabrina tells Prudence that she doesn’t want to choose between freedom and power in the episode ‘The Dark Baptism,” Prudence quickly shoots her down, telling her that the Dark Lord would be terrified of a woman having both because “he’s a man, isn’t he?”

Not to mention Father Blackwood’s desire for a male heir and that the whole “let’s ask a witch to sacrifice herself for lunch” thing once a year isn’t very pro-women.

4. Is there something strange about Ambrose’s boyfriend?

Whose heart didn’t break when Ambrose confessed his feelings for fellow warlock Luke? If his mournful “I like him, auntie,” didn’t make you melt, you’re clearly made of stone.

Still, there’s something weird about Luke, and early on in the show, it seems like we’re being set up for his reveal as a villain. After all, he dated Connor, a witch adopted by mortals as a child, who just happened to get murdered and turn up at the Spellman mortuary.

Then said deceased witch’s familiar dies, an iguana Ambrose took in after the funeral, just as Luke comes over to get it on with Ambrose. How is that not suspicious?

We later discover that Luke has it in with High Priest Father Blackwood, which suggests he may be a devout warlock after all. Nevertheless, that whole plot line could just be there to temporarily throw us off, leading to his reveal as a big bad in season two.

5. And does he really love Ambrose?

Even if Luke isn’t such a bad guy, does he really love Ambrose?

Luke seemed to be losing interest in Ambrose, after he ran out on their date due to the Psychopomps. As a result, Hilda puts a love spell into Luke’s coffee when he pops into Dr. Cerberus’s, which encourages him to call a lovesick Ambrose back.

What if his feelings for Ambrose are just the result of Hilda’s potion, and if so, what will Ambrose do if he finds out? 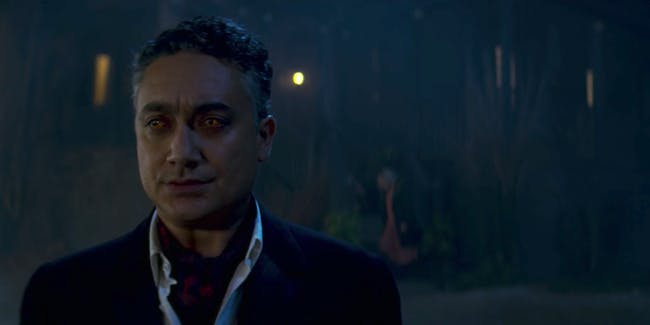 One of the sweetest moments of season one is in the finale, when Aunt Hilda finally gets a smooch from her mortal crush Dr. Cerberus, her boss and a former horror TV monster. However, the “awww” moment is fleeting, as Dr. Cerberus’s eyes flash red once Hilda is out of view.

This suggests trouble is brewing for Hilda in season two. The main theory put forward by fans and critics so far is that Dr. Cerberus could a demon in disguise. However, Elite Daily’s Dylan Kickham has has proposed that Dr. Cerberus, who dons a vampire costume for his day job, could actually be a blood sucker pretending to be human, in which case we totally ship a vampire-witch romance.

7. Why did it only take one body to raise the Greendale 13?

When Sabrina sacrificed Agatha in exchange for Tommy Kinkle in her botched resurrection, everyone made a big deal about how Death was expecting a soul and was pissed that it didn’t get one. So, when Miss Wardwell/Madam Satan brought back the Greendale 13, why did she only need a single mortal boy to bring back 13 witches?

If the Grim Reaper was so annoyed at missing one soul, would he not be even more peeved about being down 12? If the Greendale 13 had lived past a day, would they have been coughing up dirt like Agatha? Or does Madam Satan not have to abide by the same rule as normal witches due to her status?

8. Why was Sabrina the only one who could stop the Greendale 13?

Why couldn’t someone who’s already signed the book just ask for help? I know the point of this plot line was to encourage Sabrina to sign and move the story forward, but that still doesn’t mean it makes a whole lot of sense. Sabrina needed to sign the book to become a full witch, but there’s tons of strong full witches already in Greendale. Couldn’t one of them have just asked the Dark Lord for guidance?

After spending the first three episodes battling for her freedom, why did she not once question Miss Wardwell’s insistence that only Sabrina had the power? And if the Dark Lord was so petty as to only give the information to Sabrina, was that not a big warning sign to find another solution and not sign her soul away? 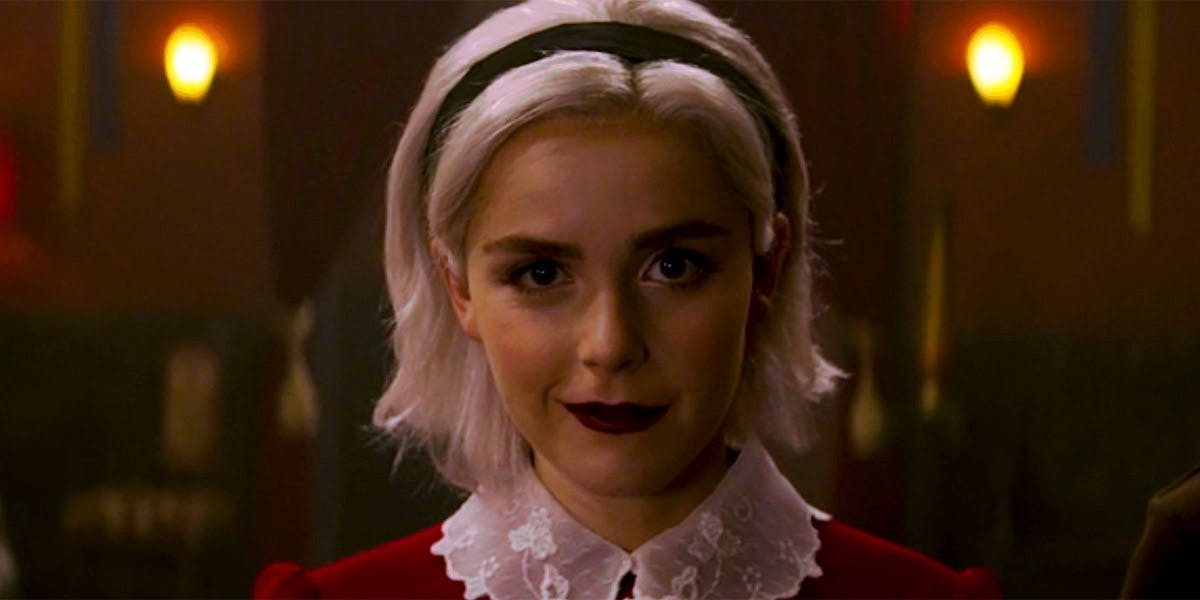 9. Why did her hair change color once she signed the book?

We get that the change is meant to represent Sabrina’s transformation from half witch to full witch, but still, we didn’t know the devil was a top hair stylist.

10. Is Dorothea Putnam good or bad?

It’s never explained why Susie can suddenly see the ghost of her ancestor, Dorothea Putnam, who, it’s suggested, struggled with her gender identity—like Susie. Either way, the spirit seems to be on the side of good, offering Susie advice towards the end of the first season. However, in the final episode, Dorothea, or the thing claiming to be her spirit, disappears at a crucial moment. Does this mean she’s not such a friendly ghost after all?

If you’ve read the graphic novel, you’ll already know the answer to this—unless, that is, the TV show decides to go in a different direction … Roll on, season two!