Oh No They Didn’t: Chick-Fil-A Begins PR Meltdown With Attempts to Label the Muppets as Endangering Children 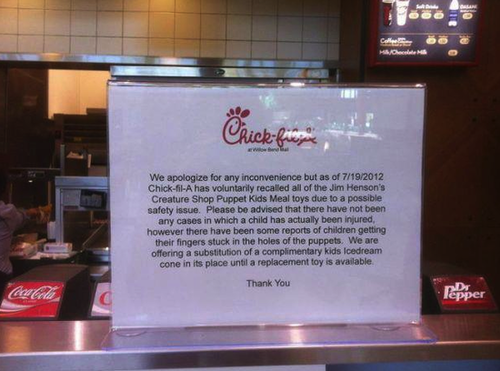 If you were on the internet at all yesterday, you’re probably already aware that, according to reports, signs like this have been cropping up in Chick-Fil-A locations around the country, explaining to customers that the reason why their kids meals are coming without toys is because the Jim Henson Co. manufactured puppet parts that are dangerous to children.

That is, it’s not a petty reaction to the Jim Henson Company announcing that they would no longer be partnering with Chick-Fil-A in the future and would be donating the proceeds of their latest business transaction to GLAAD, following the admission by Chick-Fil-A’s president Dan Cathy that his company was unashamed of and unafraid to continue their monetary support for anti-marriage equality organizations considered hate groups by the Southern Poverty Law Center.

And if some internet photos from a couple locations aren’t enough to convince, Tiffany Greenway of Chick-Fil-A Corporate Public Relations gave this statement to ThinkProgress.org:

We can confirm that it is true that Chick-fil-A voluntarily withdrew the Jim Henson kids meal toys nationwide because of a potential safety concern. This is unrelated to the Jim Henson announcement.

Henson Co. made their announcement this past Friday, and while the notice in Chick-Fil-A stores is dated the day before, the company’s reframing of the “recall” as a “withdrawl” without elaborating on specific incidents of injury or finger-sticking raises a lot of eyebrows. Combine that with the obvious fact that Henson Co. probably didn’t make the decision to break off a lucrative business relationship and then announce it in less than twenty-four hours, and then combine it with the discovery, by the eagle-eyed gaze of the internet, of what looks a lot like a Chick-Fil-A sockpuppet on Facebook propping up Chick-Fil-A’s accusations against Jim Henson Co. — oh, you missed that?

Gizmodo covers it well here. Essentially, an eight hour old Facebook account purporting to belong to an eighteen year old girl lept to defend the fast food retailer when commenters accused it of lying about the true reasons for the toy recall. I say purporting, because it was using a Shutterstock photo as a user picture and has since been deleted entirely. Chick-Fil-A officially denies that the person who created the account was connected to them, but, as Redditors have pointed out, the stock photo used was without watermark, meaning that somebody paid for it, which only seems likely if the person behind the account was not paying for it out of pocket: free photos of teenage girls are not exactly scarce for the googling.

It would seem that while Chick-Fil-A has no problem with creating a public image of being against basic civil rights for millions of Americans, it’d rather that people not think that they were on the wrong side of a fight with the Muppets. And I don’t blame them. I remember the last time a fast food chain went up against Kermit and Co.

Of course, if you’re looking for an even weirder recap of the whole situation, Taiwanese news outlet NMA World Edition (the folks who do the weird computer animated recaps of American political scandals) have created one that I’m sure will offend nobody.