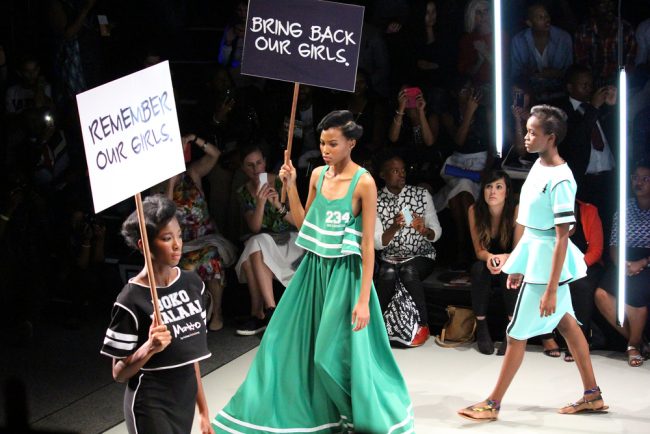 When last we heard about the Nigerian schoolgirls from Chibok who were kidnapped by an Islamic militant group called Boko Haram, twenty-one had been freed only to face sexist shaming when they returned home. Today, we learned that more girls have been freed by their captors, only to have to deal with publicity before getting to see their families.

Over the weekend, the Nigerian government, along with “Security agencies, the military, the Government of Switzerland, the International Committee of the Red Cross, and local and international NGOs,” according to an official statement, negotiated the release of 82 of the kidnapped schoolgirls in exchange for the release of five Boko Haram commanders that were in custody.

The girls were brought to the residence of Nigerian President Muhammadu Buhari where he staged a photo op almost immediately after their rescue, and before they were even released to their families:

This evening I received 82 of our daughters, who have just regained their freedom after three years in Boko Haram captivity. pic.twitter.com/fy6pEXAOZx

This move has received criticism from Amnesty International, who objected by calling the meeting a “publicity stunt that largely doesn’t reckon with their privacy.” They also fear that the girls being in lengthy detention might negatively affect them psychologically, too. Meanwhile, NPR’s Ofeibea Quist Arcton reports that “Some of the young women looked bewildered and weary by all the attention.”

So far, with the release of these 82 girls, the whereabouts and condition of 113 girls remains unaccounted for more than three years after their capture. Despite needing to release some Boko Haram commanders to make this happen, this is wonderful news and allows us to continue hoping that more girls can and will be rescued.

However, there also seem to be indications that the way the girls are being handled and treated upon their return isn’t exactly in their best interests. From their former friends and neighbors at home stigmatizing them, to their government patting themselves on the back and taking photo ops before getting them home to their families, it seems as though these girls are being used no matter where they go.

They are more than just a hashtag. They are not political footballs or cautionary tales. They are girls who deserve to go home to live freely and piece back together the lives they lost.