Feminism Around the World: 21 Nigerian Girls Kidnapped by Boko Haram Released…Only to Deal With Sexist Shaming at Home 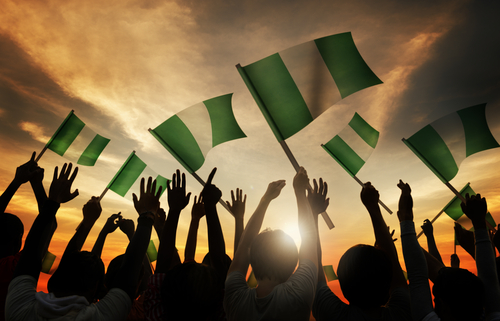 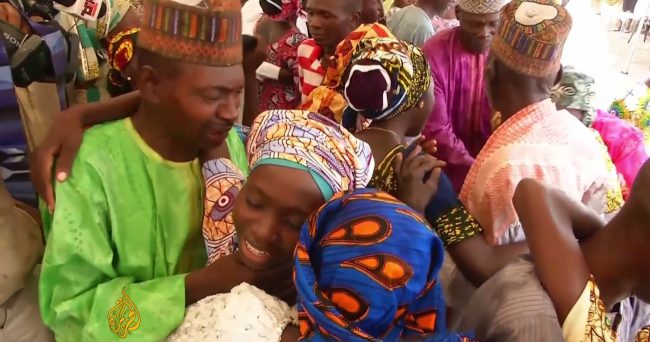 Back in April of 2014, a militant Nigerian Islamic fundamentalist group called Boko Haram kidnapped 276 schoolgirls from a school in Chibok, a small, Christian town in mainly Muslim northern Nigeria. Fifty-seven of them escaped within hours of being captured, and one additional girl was rescued in May. Sadly, about six died in captivity, leaving just over 210 girls remaining. Last week, Nigerian officials, in conjunction with international mediators, negotiated the release of 21 girls, who were finally reunited with their families after two and a half years.

Over 180 girls remain with Boko Haram, but according to The Guardian, Nigerian officials are hopeful that they will be able to negotiate the release of more of them, unharmed. General Rabe Abubakar, a defence ministry spokesman said, “We’re not authorised to release the details of how the girls were retrieved yet, but the operation to retrieve the girls is ongoing. We are optimistic we will retrieve more of the Chibok girls from Boko Haram very soon, in the coming weeks.”

While the return of these girls is extremely good news, and it’s encouraging that officials are so confident about the others still being held, more than 100 of the girls reportedly don’t want to be rescued. To understand why, one must understand what happened to them once they were abducted, and also what the social climate is like in Chibok.

As reported by Al Jazeera:

“The freed girls have told their parents they were separated into two groups early on in their captivity, when Boko Haram commanders gave them the choice of joining the armed group and embracing Islam, or becoming their slaves.

The girls freed and those whose release is being negotiated, numbering 104, are believed to be in the group that rejected Islam and Boko Haram. The freed girls said they never saw the other girls again.”

So, it’s quite possible that the girls who don’t want to be rescued, the girls that chose to survive by accepting Islam and Boko Haram rather than be slaves, are suffering from Stockholm syndrome, or some other form of brainwashing. However, there could be other stuff at work, too.

Apparently, the girls who escaped mere hours after being captured were shamed when they got home. Though they were kidnapping victims and had the fortitude to escape almost immediately after being kidnapped, they were branded “Boko Haram wives” and taunted by their community. Now, those girls have since left Chibok to escape the stigma of their experience. 20 or so are currently being educated in the United States. So the remaining girls might not wish to come home to their parents simply because they are either ashamed, or because they fear the response they’ll get from their own community, which is heartbreaking.

It goes to show that we still live in a world where a woman’s worth is based entirely on her body: how “spoiled” or “unspoiled” she is, whether or not she’s capable of giving birth, whether or not she is capable of sex or servitude. While there are conflicting reports as to whether or not the girls were all sexually assaulted, or whether those who chose slavery were simply domestic workers, the fact is that Boko Haram kidnapped them to 1) increase their ranks by converting Christians, and 2) increase their ranks by marrying and raping these girls to produce future soldiers.

Meanwhile, the response they get when they’re released is no better, and is very definition of victim-blaming, punishing the girls for what they’ve been through by ostracizing them. It seems that the Chibok girls are on the receiving end of sexism whether in captivity or not.

Thankfully, there seems to be hope, too. As you see in the above video, the mother of one of the freed girls is insistent that her daughter will continue to be educated and go on to do great things, and that Boko Haram has not won as long as there girls pursue their education.

While we know very little about how the negotiations work and why only 21 girls were released this time, there’s hope that more is possible now that successful negotiations have happened, and this seems to be breathing new life into the #BringBackOurGirls campaign. One of the campaign’s leaders, Professor Emma Shehu, told The Guardian “We’ve been castigated by the past government, by the military and by the hardliners in the current administration for continuing with our advocacy and protests for the kidnapped girls. They’ve treated us as though we were mad but we’re happy that this is partly a vindication of our insanity. For the parents it’s raised their hopes.”

May that hope fuel their fire and allow them to continue their fight until all the girls have been freed. And may those girls find a safe haven free of shaming and stigma once they are out of captivity.

ARGENTINA: “Argentina: hundreds of thousands of women set to protest against violence” (The Guardian, 10/19/16)