Get Ready for Chewbacca: The Movie 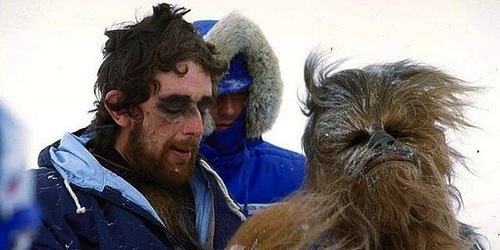 Relax, George Lucas isn’t pulling another wad of money out of your pocket. That won’t happen until Episode II hits theaters for its 3D rerelease at the earliest, or at least until Star Wars: A New Hope‘s 3D rerelease comes around in a few years. Chewie, as the project is currently known, is instead a biopic about the seven foot, three inch tall Peter Mayhew, the man behind Chewbacca the Wookie.

According to the Hollywood Reporter, Kyle Newman, of Fanboys, is working on the script for a full biopic of the English actor and performer, who has stayed active in the Star Wars fan community ever since the movies became such a huge hit.

The script, by Evan Susserand Van Robichaux, is set against the backdrop of the making of 1977’s Star Wars and tracks Mayhew as he tries to balance a career as a hospital worker while chasing Hollywood dreams by playing a suited alien who would go on to become one of the most iconic screen sidekicks in modern times.

If there’s something shocking about watching behind the scenes footage of Star Wars, its seeing the movie without post production voiceovers or soundtracks. Most memorable to me has always been a scene in the control room of the Death Star. All of a sudden, a well enunciated and English-accent voice sprung from Chewbacca’s face: “The old man’s barmy!”

“Yeah,” Han agreed, and said to Luke, “Where did you dig up that old fossil?”

Mayhew’s only one of many actors to portray major Star Wars characters unseen inside of costumes and, in a couple cases (R2-D2, Darth Vader), also completely unvoiced. While fans of course know about everybody involved, there’s always more room for mainstream attention to them.