Have you ever looked at a textbook diagram of the chemical bonds that make up molecules and thought to yourself, “This is just a dumb drawing — how do they know what it even looks like in real life?” Well stop it. Stop it right now. Felix Fischer of the U.S. Department of Energy’s Lawrence Berkeley National Laboratory is going to show you what it looks like with these gorgeous high-resolution images of individual carbon atoms linking together. And guess what? They look just like they do in the textbooks. Happy now?

Fischer originally set out with the goal of finding a better way to mass produce graphene nanostructures for use in transistors, logic gates, and other pieces in electronic equipment. To create these exact bonds from the bottom up, the laboratory at UC Berkeley needed a clear view under controlled reactions in order to make sure they were getting it right.

Enter a clever imaging technique called “noncontact atomic force microscopy,” which basically works the same way that a phonograph does: Scratching or probing a surface with a sharp tip in order to read it. Unlike a phonograph, though, the AFM ‘needle’ — really a single oxygen atom — is deflected by small electronic forces that create a readable pattern. This type of microscopy ended up being so precise that it was able to detect not only the atoms, but the actual forces that create the bonds between them. 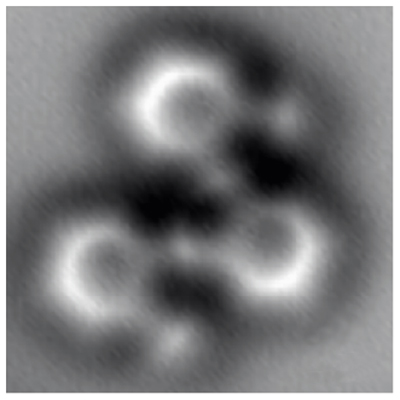 This is the first time that such a image has ever been captured, according to Berkeley Lab. Fischer hopes that this unique approach to detecting molecule bonds will lead to bigger and more complex graphene nanostructures in the future. Before that, however, scientists have a lot more to discover about the results that certain molecular reactions might possibly yield.