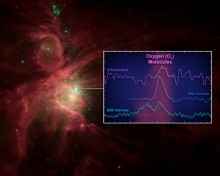 The European Space Agency (ESA) has announced that the Herschel Space Observatory has found the first significant evidence of molecular oxygen in the Orion Nebula. The amount of oxygen found is ten times larger than was expected based on previous observations of other molecular clouds, however is still well below theoretical expectations.

Oxygen is the third most abundant element in the Universe (after hydrogen and helium) and is a critical part of the chemistry of molecular clouds. It is also fundamental to life on Earth, which makes finding it in space the subject of intense research. The Herschel results suggest that under the right circumstances, heat from newly created stars can free oxygen frozen on grains of dust. This would increase the amount of molecular oxygen that is able to form in warm, dense gas clouds like the Orion Nebula.

“Theory suggests we should find lots of oxygen atoms locked in molecular oxygen (O2), but previous searches keep falling short of such a large amount. With this new data, we finally have a strong hint at where cosmic oxygen might be hiding.”

The search for molecular oxygen in space has been challenging for researchers. The dense molecular clouds where stars form typically have a rich chemical composition. Using spectroscopy to view the spectral lines from the different chemicals, researchers can sample the clouds for atoms and molecules to try to obtain an inventory of chemicals. By evaluating this inventory and comparing the data with laboratory experiments and theoretical chemistry, researchers have a good idea of what chemical signatures to search for in space.

To locate a molecule like oxygen in space, researchers study the spectra to find lines at specific wavelengths that are representative of the energy released by the molecule as it undergoes change. According to the researchers, molecular oxygen can be thought of like a tiny dumbbell that rotates end-over-end. This movement of the molecule creates several specific lines at a distinct set of wavelengths.

But, with so much molecular oxygen on Earth (it is what keeps us alive after all) it is nearly impossible to observe the distinct signals that indicate the presence of oxygen in space from Earth-based instruments. Molecular oxygen in Earth’s atmosphere absorbs all radiation at the wavelengths researchers would study for signs of oxygen. So, the search for oxygen in space needs to be conducted by instruments that are launched into space.

Previous research looking for oxygen in space has come up with a discrepancy between what was found and what was predicted. Researchers have predicted that for every 100,000 molecules of hydrogen (H2) in space there should be one molecule of oxygen. But NASA’s Submillimeter Wave Astronomy Satellite and the Swedish Odin Spacecraft found O2 at levels 100 times lower than expected. Researchers have hypothesized that this is because some oxygen atoms freeze on the surface of dust grains in space in the colder part of the gas clouds.

This is where the Herschel Space Observatory comes into the picture. The Herschel Oxygen Project, led by Goldsmith, was designed to address the discrepancy between observed and predicted oxygen in space. Goldsmith says:

“We have observed some regions of the Orion Nebula with the HIFI Spectrometer and have detected the signal of O2 molecules at three distinct wavelengths. The abundance of this molecules is still below theoretical predictions, but we see evidence, for the first time, that it might be greater, in some spots of the cloud, than the average value.”

According to the researchers, Herschel’s new data indicates that, in some regions of molecular clouds, the effect of oxygen molecules freezing on dust grains might affect a smaller level of oxygen than previously thought. The new data indicates one molecule of O2 for every million molecules of H2, which is an improvement to only 10 times less than predicted.

More research is still needed to clear up the discrepancy between predicted oxygen levels and observed oxygen levels, but the researchers are hopeful that space’s hidden oxygen will eventually be revealed. The research will be published in the Astrophysical Journal.