That Time Chell Almost Got Married in Portal 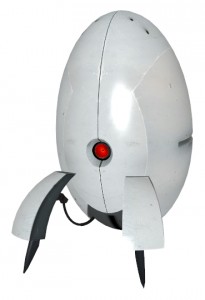 PAX, whether Prime or East (or the newly announced Australia), is always a good time to hear snippets of interesting secrets about your favorite games. Today, we bring you a story of adventure, daring, and romance… okay, more like forced marriage than romance. Would it be useful to know that Animal Kings are involved?

Essentially, it concerns an abandoned plot thread from Portal 2 where, after Chell helps a friendly tribe of lost turrets, the tribe’s Giant Animal King turret would marry her to one of his turrets, which would have then followed Chell around the rest of the game.

The “Animal King” would not appear until the end of Portal 2, most notably during the Turret Opera sequence, but he is forshadowed in an Aperture Science slideshow about what to do if the earth has been taken over by a ruler “that either refuses to or is incapable of listening to reason.” In one slide, the Animal King appears in what looks like the middle of a UN Assembly, as some flee and others bow down to him. 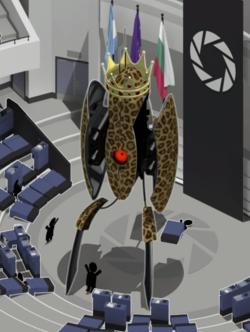 As you can see, the Animal King is a giant leopard print turret… with a crown. The other unique turret model appearing in Portal 2‘s Turret opera is the solo soprano turret who sings the game’s reworded version of the “Cara Mia Addio” aria. The in game files for this turret (pictured at the top of this post) are labeled “turret wife.”

Valve writer Erik Wolpaw revealed the secret origin behind the Animal King and the Turret Wife at a panel yesterday. From Game Informer:

According to Wolpaw, at one point in Portal 2 Chell was going to stumble upon a pile of abandoned turrets. These turrets were like a lost tribe one might find surviving on a forgotten island somewhere. Chell would help these turrets in some way, then the giant Animal Turret King (seen in Portal 2), would marry off one of its turrets to Chell. Valve even had a bride turret constructed. This turret would follow Chell around for the rest of the game in a similar fashion to Watson in Sherlock Holmes Nemesis.

I really, really hope that that’s a direct quote and not a metaphor on the part of Game Informer’s Tim Turi, because this is what the NPC following was like in Sherlock Holmes Nemesis:

I feel like a turret following me around like that in Portal 2 would only have improved my experience.

But I think what I like most about this is that the plot diversion doesn’t feel the need to change the details of the trope it’s riffing on (the heroic outsider helps a tribal society, gets girl as reward) because of Chell’s gender. She’s getting married to the Turret Bride, after all, not the Turret Groom.