Cheeta the Chimpanzee, the Other Famous Primate from Tarzan (Maybe), Dies at 80 (or 51) 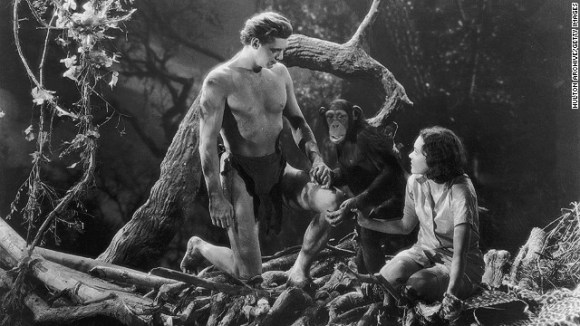 Cheeta, the chimpanzee co-star of Johnny Weissmuller in two Tarzan movies, has passed away at the ripe old age of 80. In his post-Hollywood years, he enjoyed a comfortable, happy life in Florida at the Suncoast Primate Sanctuary. There has been much dispute about his actual age, because generally, chimpanzees don’t live past 50 years old, and that would mean that the late chimp may not have starred in any Tarzan movies with any former Olympic swimmers. But now, he swings from branches in that glorious jungle in the sky. We are losing our Hollywood icons by the day, everyone.

This week, the Suncoast Primate Sanctuary posted the following comment on their front page:

It is with great sadness that the community has lost a dear friend and family member on December 24, 2011. Cheetah [sic], star of the Tarzan films, passed away after kidney failure during the week of December 19, 2011. The Sanctuary’s residents and volunteers would like to thank all of the community members for their continued support as the Sanctuary continues to expand on the legacy and foundation Cheetah continues to oversee as he watches over his supporters, friends, and family.

While Cheeta’s trainer, Tony Gentry, claimed that the chimp was born in the early 1930s (making him around 80 at his death), other sources claim he was not born until 1960. Not only that, but Gentry’s claims were debunked in 2008. Telegraph points out that various chimps played Cheeta in different scenes in the 1932 and 1934 films, Tarzan the Ape Man and Tarzan and His Mate, including Jiggs, Zippy, and Harry. But Jiggs, according to Wikipedia (and trust us, we’re taking this with a grain of salt), died in 1938. So could this chimp be either Zippy or Harry and just renamed Cheeta(h)? Or is Cheeta just another chimpanzee that people want to believe is the original Cheeta? The world may never know, because sadly, it is too late to subject Cheeta/Jiggs/Zippy/Harry to a lie detector test.

Either way, it’s sad to see a star from the Golden Age of Hollywood pass away. Or even just an animal.