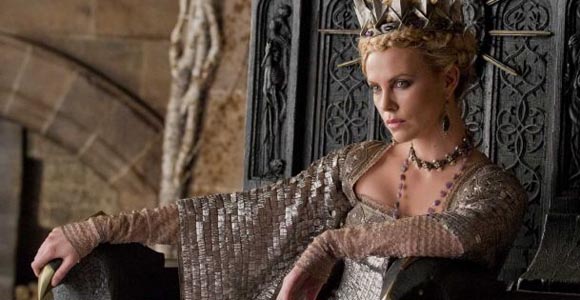 I’ve long enjoyed Charlize Theron as an actor but I had no idea she was a legitimately cool person in real life until now. She’s been on a promotional whirlwind lately thanks to two new films, Snow White and the Huntsman and Prometheus, and has been quoted saying some very interesting things. Hit the jump for what she has to say about another upcoming film, Mad Max: Fury Road, and the possibility of joining HBO’s Game of Thrones.

Theron did an interview with /Film during the London premiere of Prometheus in which she discussed finally getting started on Mad Max.

“I leave in like two and a half weeks and we start shooting I think around mid-July in Namibia,” she told them. “I’m fucking dying, too, it’s been three years. It’s time to skin this cat already, so yeah, I’m very excited about it.”

She also said she’s excited to see the world of Mad Max re-imagined and to see her co-star Tom Hardy do his thing. But she also mentioned taking on the role because of her character in particular.

“[Director] George [Miller] really created a female character that I’ve never read anything like this. I mean, I’m scared shitless,” she said. “I think for me originally when they were like, ‘Oh, Mad Max.’ I was like, ‘Uh, I’m not going to play the fucking girl for Mad Max.’ Then I read it and I was like, ‘Oh, Mad Max. I feel sorry for you.’ (Laughs) That rarely happens.”

Well I don’t know about you but I’m sold!

Then there was the interesting conversation the Oscar winner had with ScreenRant at the same press junket. They got on the topic of television.

“I think some of the most creative work is coming out of television. I feel it’s very immediate and I like that,” she said. “It’s really fast. It’s got a pace to it, and that’s why I think everybody in my field wants to just do good material.”

So what type of shows does she find herself watching in her free time?

“I watch a lot of stuff that people are somewhat shocked by – but I am absolutely like foaming at the mouth over Game of Thrones. Like, I can not get enough of that,” she said. “When my son came in my life, that was a bottle feed because I couldn’t watch television; I used to watch so little. That was my TiVo feed every two hours – watching Game of Thrones. My mom was like, ‘Do you think it’s fine that you’re feeding your son while there’s like sword fights?’ I was like, ‘It’s fine, Mom. It’s fine.'”

The next question was inevitable, would Theron be interested in a role on the HBO series if they asked her?

I love this woman.

So, Thrones fans, who could you see Ms. Theron play on the show?