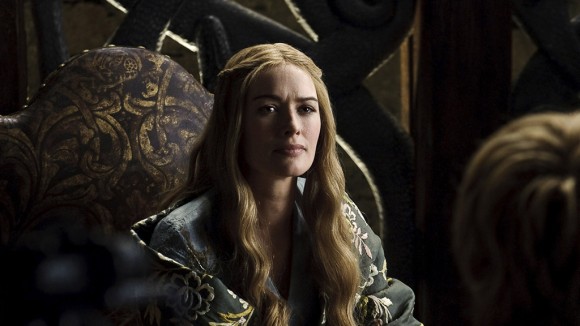 Jezebel recently made a very interesting archaeological discovery, only to find out that weirdly enough, it wasn’t that old. Apparently, over at the site for Tampax tampons, the resident expert on all things menstrual was asked by a concerned mother if tampons would “take her daughter’s virginity.” We’ll defer to ‘Bel’s commentary on that, because there was a similar, more interesting question asked in the comments by one (fictional) concerned mother on a hit HBO series.

From commenter SorciaMacnasty, addressed to the expert, Iris:

We’re an old-fashioned family and I like to think that my daughter is an old-fashioned kind of gal. She loves her corset and we’ve never had a single argument about her chastity belt! Even though the house is surrounded by a moat, (and my oldest son is great with his crossbow) it’s been tough work keeping the boys at bay this summer!

Ever since my little girl has blossomed into her full ladyhood, she’s been disappointed in the options available to sop up her moon-flower juice each month. We’re simultaneously bargaining with several families to arrange her marriage (hopefully before she hits spinster status by the ripe old age of 15!), so I can’t have a sulky sally on my hands, now can I?

Since her imminent marriage will be arranged and heftily dowered, we’ve got a lot at stake in preserving Precious Girl’s virginity. I know it’s old-fashioned, but we still like to hold the traditional ceremony of the bloody sheet, where my dumpling’s future husband will proudly wave the crimson-stained nuptial linen out of their parapet’s window the morning after her passage into wifely bliss. How can we look forward to such a warm family occasion if my plumpy insists on shoving wads of cotton up her Sacred Baby Passage and thus risking a rupture of her Proof O’ Virtue card? We’d would be SO humiliated if the neighbors, friends and political allies all showed up to the castle for a bloody sheet ceremony only to be greeted with the crisp white failure-sheets of a common tavern wench.

Any advice you can offer would be gratefully received. Send a raven, won’t you?

She would also like to inquire about a good over-the-counter paternity test for three of her children that can be easily manipulated. Slow clap, commenter SorciaMacnasty.