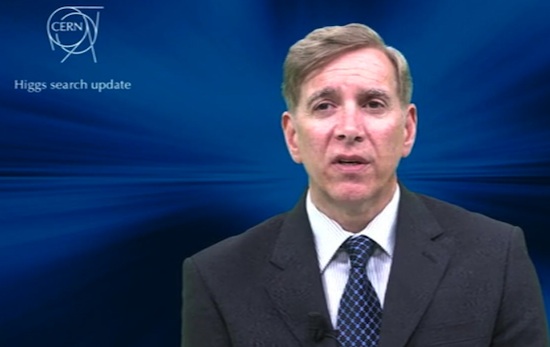 Well, this is strange. According to several news outlets, a video was accidentally posted to the CERN website and featured an announcement that the Large Hadron Collider had indeed discovered a new particle. Now things get stranger: CERN’s press office says that not only was this never meant to be posted online, but is one of many videos produced in anticipation of different outcomes.

The video, now removed, is reported to feature the spokesperson for the CMS experiment Joe Incandela and is dated for tomorrow. This presumably means that it was meant to be used during tomorrow’s press conference, or not (more on this later). In it, Incandela apparently describes a new particle which decays into two photons — indicating that it is a boson. He also says that it is extremely massive, but he stops just short of saying that it is, in fact, the Higgs boson.

What follows is a transcript of the video, from the Daily Telegraph:

We’ve observed a new particle. We have quite strong evidence that there’s something there. Its properties are still going to take us a little bit of time. But we can see that it decays to two photons, for example, which tells us it’s a boson, it’s a particle with integer spin. And we know its mass is roughly 100 times the mass of the proton. And this is very significant. This is the most massive such particle that exists, if we confirm all of this, which I think we will.

And this is very, very significant. It’s something that may, in the end, be one of the biggest observations of any new new phenomena in our field in the last 30 or 40 years, going way back to the discovery of quarks, for example. We see very, very strong evidence of the decay to two photons, and a very very narrow peak in the distribution. We see also the evidence of the decay to two Z-particles, which are like heavy photons, in this particular theory of elementary physics. And then we’ve studied the number of other channels that have reported, but these are less sensitive and are therefore less conclusive at the moment. But we are very excited. I’m extremely tired at the moment, so I may not appear to be as excited as I really am, but the significance of this observation could be very very great.

It could be ultimately seen that its properties are very consistent with the Standard Model Higgs, or it could be found out that its properties don’t exactly match the predictions for the Standard Model. And if that’s the case, then we have something really quite profound here. It could be a gateway, if you like, to the next phase of exploring the deepest fabric of the universe, which is pretty profound when you think about it.

And the other thing I would like to say is that obviously all of this is extremely preliminary. What we’ve looked for is a few grains on a beach, in one sense. I did some calculations, and if you replaced every event, every collision of the beams that we’ve scanned or had take place in our experiment over the last two years, if you let each one of those be represented by a grain of sand, you’d have enough sand to fill an Olympic-sized swimming pool. And the number of events that we’ve collected that we claim represent this observation are on the order of tens, or dozens. So it’s an incredibly difficult task, and it takes a lot of care and cross-checking. We’re re-calibrating, and we’ll have better results, even on the current data, when we release at the end of the month. But it’s very exciting.

Obviously, if accurate, this is an extremely exciting discovery. While the Higgs boson’s mass-granting properties are much lauded, what’s really of interest to physicists is that it is the last particle of its kind predicted by the Standard Model of particle physics that has yet to be discovered. We know it should be there, we just haven’t found it yet. Reading between the lines, it sounds like Incandela has glimpsed this final particle — taking us closer to confirming that we’ve been right about how the universe works.

However, CERN is now saying that the video was never intended to be seen. In fact, the video might not have anything to do with tomorrow’s press conference. ScienceNews writes:

CERN spokeswoman Corinne Pralavorio says the video was one of several made to cover different possible scenarios of a Higgs announcement and was not supposed to have been posted online. “Even we in the press office do not know what they are going to announce tomorrow,” she said on July 3.

Personally, I find it extremely unlikely that if CERN were to prepare multiple videos that they would include such personal anecdotes as “I’m extremely tired at the moment, so I may not appear to be as excited as I really am, but the significance of this observation could be very very great.” That sounds too much like the genuine article. It may be possible that this video was prepared a while ago and the information is no longer accurate, but I can’t believe that they would make a whole slew of possible videos “just in case.”

That said, if I were to place a bet I’d say that this is more-or-less what we’re going to hear in the press conference tomorrow. Extremely good news, extremely exciting news, but probably not a total confirmation of the Higgs boson’s existence. Of course, this announcement still says quite clearly that the LHC experiments have found something. We’re not talking about hypotheticals anymore.

It does mean that we still have to figure out just what the hell we’re looking at.