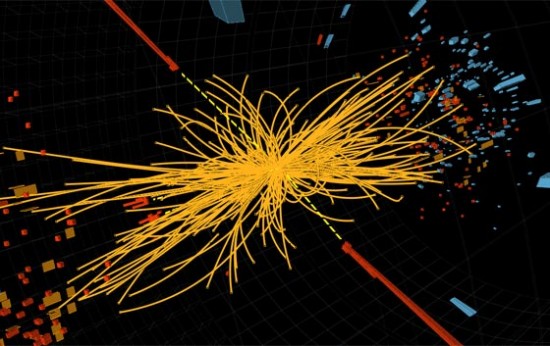 After keeping the physics world on pins and needles for days, scientists working with the Large Hadron Collider at CERN announced that they had discovered a particle which appeared to fit the profile of the long-sought Higgs boson. Though this is a celebratory moment, CERN researchers stress that there is still much to learn about this new “Higgs-like“ particle.

In the announcement, CERN scientists confirmed that they had finally reached the “five sigma” threshold for a discovery. They reported that the new particle was indeed a boson in the mass ballpark of 126 gigaelectronvolts (GeV), making it the heaviest yet found. These results were largely in line with the video “leaked” yesterday onto the CERN website.

In the press release announcing the findings, Sergio Bertolucci, the research director at CERN, said:

“It’s hard not to get excited by these results,” […] “ We stated last year that in 2012 we would either find a new Higgs-like particle or exclude the existence of the Standard Model Higgs. With all the necessary caution, it looks to me that we are at a branching point: the observation of this new particle indicates the path for the future towards a more detailed understanding of what we’re seeing in the data.”

Though the announcement is preliminary, CERN researchers are hoping to finish going through all the data and publishing their full results at the end of the month.

You’ll notice that everyone isn’t saying anything as definitive about the nature of the particle. That’s because while it looks an awful lot like our expectations for a Higgs boson, no one has ever seen a Higgs boson before. There could be many features of the particle that have yet to be uncovered, which is why CERN staff and other physicists are portraying this as more of a beginning than an end.

“Why are you applauding, I’m not done yet. This is just beginning, there is more to come.”

Thanks to a special extension, the LHC will run until the end of the year at which point it will be shut down for two years for major repairs. The goal, it seems, is to get as many collisions in before that scheduled downtime, to give researchers the most information to work with. This is especially important, as there are few unusual features to this particle.

The results announced today, for instance, come from observations of just a few ways in which it’s expected for the Higgs boson to come into existence and then decay. The NYTimes reports that, weirdly, some of these ways (the folks at CERN call them “channels”) appear to be producing more of the Higgs-like particles while others are producing less. This suggests that there’s a lot more to this Higgs-like particle than we might have expected, and that there is far more to learn.

This sense was summated by CERN’s director general Rolf Heuer who concluded the agency’s press release by saying:

“The discovery of a particle consistent with the Higgs boson opens the way to more detailed studies, requiring larger statistics, which will pin down the new particle’s properties, and is likely to shed light on other mysteries of our universe.”

Though today’s announcement renders some of this video obsolete, it’s still a good breakdown of what the Higgs boson is, and why we’re looking for it.

The Higgs Boson Explained from PHD Comics on Vimeo.

(CERN, The New York Times, image via CERN from the CMS experiment showing two photons in red being created suggesting a Higgs boson)