Turns Out The Cereal With Cartoon Characters Actually Does Taste Better 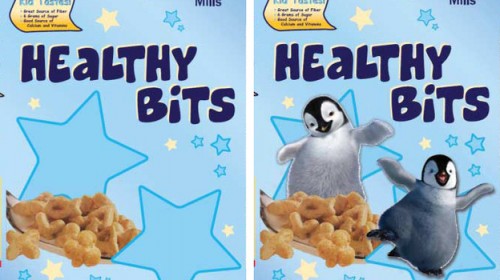 Or, at the very least, if you think it tastes better, you’re not alone. In a study (abstract here) published in the Archives of Pediatrics & Adolescent Medicine, scientists presented children with one of four “new” cereals. Half the cereal was called “Healthy Bits” and half “Sugar Bits,” half had a branded cartoon character on the boxes, and the other half didn’t. (Which is to say, there were cartooned Healthy Bits and non-cartooned Healthy Bits, and the same for Sugar Bits.) Kids sampled the cereal and then rated it on a five point scale of smiley faces.

Oh, and in case you hadn’t guessed, all of the cereal was actually the same stuff. The boxes were the only difference. But despite possibly the least exciting names in sugary cereal history, results seemed to confirm and deny what one might assume them to be.

Unsurprisingly, having recognizable cartoon characters on the boxes caused kids to rate a cereal as better tasting, affecting their subjective assessment of it. I think we can all see evidence of that in our own lives, whether we’re thinking of our own kids or our own kid selves.

But surprisingly enough, when the cereal had Healthy in the name, it also was rated as being more tasty. So, either kids are more aware of the demands of healthy eating, or, as Sociological Images suggests:

There might be a contrast effect, also. Maybe kids expect something  called Healthy Bits to be really gross and, if it doesn’t, evaluate it more positively than they would have, while they expect Sugar Bits to be super awesome and rate it particularly harshly if it doesn’t live up to their hopes.

Frankly that makes a bit more sense to us as an explanation, but the study found that amount of “good taste” rating that could be garnered by having a cartoon character to be quite a bit more than the difference created between “Healthy” and “Sugar,” so don’t expect companies to start making “Healthy Froot Loops” or “Healthy Cookie Crisp.”

The study did not, however, evaluate what kids think of when their cereal comes in a bag instead of a box, maybe because we all know that it just doesn’t taste the same.