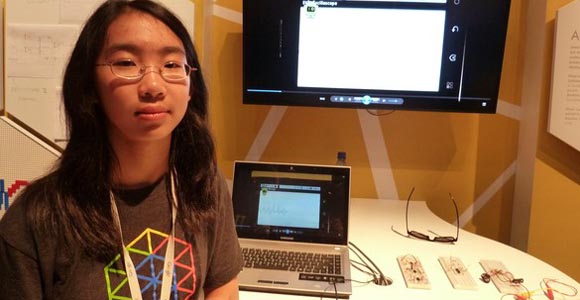 Catherine Wong is a 17-year-old high school student from New Jersey but she’s already making a name for herself in both the science and technology communities. Wong was a finalist in second annual Google Science Fair for creating a bluetooth-enabled device that allows for remote cardiac examination. Yup, she made a cellphone that will test your heart.

Wong was a finalist in the Google contest but she won National Public Radio’s “Joe’s Big Idea” video contest. She set out to make a device that would give some of the millions of people in this world with limited medical access, but who have cellphones, a way to get their heart tested. The device she made is like a portable electrocardiogram, or ECG/EKG, a test performed countless times every day in hospitals around the world.

Here’s the project description via her Google Science Fair page:

The purpose of this study was to design and evaluate a Bluetooth-enabled telemedical electrocardiograph prototype capable of transmitting an EKG image for remote examination using a cell-phone to determine prototype feasibility as a method for remote cardiac examination. electrocardiograph, a graphical display of minute transthoracic voltage fluctuations due to heart muscle depolarization, requires amplification of the electrical signal and then a method of display. Device construction involved creation of two separate components, a Bluetooth-enabled wireless transmitter with a microprocessor programmed to read the EKG output for display on the cell-phone, and instrumentation amplification circuitry to amplify cardiac electrical activity. The final cell-phone compatible wireless EKG prototypes successfully demonstrate the feasibility of the concept of remote cardiac EKG transmission over cellular networks, and allowed for three-lead EKG images using multiple electrode placements to be saved and stored. It provides a cost-effective alternative to traditional, non-portable EKG devices and telemedical systems, with low initial equipment requirements and flexibility for integration with digitized healthcare systems.

NPR says the device, “uses off-the-shelf electronic components to pick up the heart’s electrical signals, then transmits them via cellphone to a health professional who can analyze them.”

“It is a leapfrog approach that bypasses standard pieces of medical equipment that are expensive and not readily available to these populations,” Elizabeth Nabel, president of Brigham and Women’s and Faulkner Hospitals and a former director of the National Heart, Lung and Blood Institute at the National Institutes of Health, told NPR.

Wong received help from her high school physics teacher on the electrical engineering and Java programming aspects of her concept. The teacher “let her borrow equipment and talked through the many problems with her. After months of building, testing and failure, she came up with a working ECG that connected to a cellphone using Bluetooth wireless signals. The heart rhythms are displayed on the phone’s screen, thanks to a Java app that she wrote.”